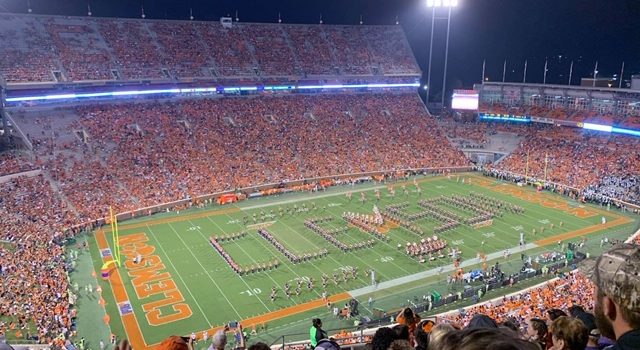 Clemson University has been a national power in college football. I might have been a little rough on the school last week, when I covered college towns and COVID. I’d like to make it up to their community by taking a distant look into the school. I also collected some photos on Pinterest for you. I’ve covered college sports champions and powers on this site before, including LSU,  Kentucky, Alabama and Kansas. It’s a good time to add Clemson to the list.

Clemson was college football’s national champion when I was in senior in college. In fall 1981 the Tigers went unbeaten, capping off their success with a 22-15 victory over Nebraska in the Orange Bowl. Three Tigers, Terry Kinard, Perry Tuttle and Jeff Bryant  became first-round picks in the NFL, Kinard earning a Super Bowl ring with my home state New York Giants. Tuttle would earn Grey Cup accolades with the Canadian Football League Winnipeg Blue Bombers.  Then Tigers’ head coach, Danny Ford was, and still is, the youngest head coach to win a National Championship. From 1979 to 1989, Ford’s Clemson teams went 96-29-4 and won five ACC titles, third best behind Penn State and Nebraska. But Clemson went on probation for recruiting violations from 1982 through 1984.  The NCAA put the program back on probation again in 1990 — the penalty for 14 rules violations, ranging from cash payments to players of $50-$150 to improper recruiting techniques. Since Clemson was an upstart I rooted for them in the Orange Bowl in 1982.. I’ve rooted for them in every college football playoff game, excluding last season’s vs. LSU, a bigger upstart in itself.

Who chooses to come to Clemson?

In 1982 Clemson had 12,000 students. Today it has over 20,000 undergrads alone. While Clemson is South Carolina’s Land Grant University, and draws two-thirds of its undergrads from in-state, the next largest groups come from Georgia, New Jersey, North Carolina, New York and Pennsylvania. Clemson is relatively selective for a state school, offering admission to just over half who apply. But the university is not as selective as UNC-Chapel Hill, the University of Georgia or Georgia Tech, especially for non-residents. This, combined with the desires of Garden State and Empire State residents to leave their home states for college, makes for an interesting mix in a freshman class. I’m sure that Clemson is a first choice within South Carolina. But I’m also convinced that it’s a first choice among people from New Jersey because it’s smaller than Rutgers and has more spirit and sports. To me, it’s a less crowded version of Penn State. Great football, nice college town, mountain air, but less than half as many people to share everything.

Clemson’s resident and non-resident tuition and fees are on the high side for a state school.

Residents are ask to pay over $15,000. Non-residents get hit up for just over $38,000. That’s more than a New Jersey resident would pay to go to Georgia Tech, UNC-Chapel Hill, Penn State, Pitt or Maryland. But it’s really tough to get into Georgia Tech or UNC from New Jersey, almost as tough as it is to get into Cornell. Not to mention that football fans would see a better team at Clemson than they would at any one of those schools.

Clemson went test optional for admissions this year. Most recently the average SAT was a 1320, about the same as Rutgers or Penn State, and the average ACT was a 29. The average GPA was a 3.9.

I’d believe that the average person who can get into Rutgers or Penn State also has a fair shot at getting into Clemson. But I’d also believe that she wouldn’t get an academic award. However, those who choose to come to Clemson appear to be happy with their decision. Over 92 percent of every freshman class that has entered since 2012 has returned for their sophomore year. Sixty percent graduate in four years.

Out of the 20,000+ undergrads at Clemson, over 5,500 study engineering. Another 2,700 major in the sciences. These subjects account for over a third of the bachelors degrees. The university also has a large business program with more than 5,000 undergrads. Last week the business school announced that it has received a $60 million gift. Clemson grants a Bachelor of Arts in Architecture rather than a Bachelor of Architecture. That means that you get the undergraduate degree in four years, but you will need to stick around for another two years to get the Masters and qualify for licensing. Since I’m from New Jersey I might be shopping between Death Valley (Clemson) and Happy Valley (Penn State-University Park). If I wanted to be an architect I could earn a BArch in five years at Penn State and be prepared to be licensed. A masters sounds better than a bachelors, but I’d rather save a year of tuition and fees.

Clemson takes pride in its US News ranking on its site, but I could not find academic program rankings. Some in New Jersey might feel that they could find almost any major at Clemson that they could choose at Rutgers, and have more fun over four years.  In the case of pre-professional programs, they might be right, unless they want to study pharmacy. That program is not available at Clemson.  But Rutgers is only a train ride into New York City. Clemson is more than two hours from either Charlotte or Charleston. I listened to a few student produced YouTubes. The academic experience appears to be much like any large state school over the first two years, with large lecture classes. But Clemson also has over 1,500 students in its Calhoun Honors College, more than the number of Schreyer Honors students at Penn State, which is a much larger school.

I have been to universities like Clemson where the college literally is the town. Probably the most similar atmosphere I have visited is Blacksburg, Virginia, home to Virginia Tech. Both schools are in mountainous areas that are far from major cities. Each town has a small population aside from the students. Both schools place some importance on Greek life. The social life is campus-based, though most of the sophomores, juniors and seniors live off campus. Like Virginia Tech, Clemson takes traditions and  military associations quite seriously. But Clemson has the warmer weather and a higher athletic profile.

Clemson has one of THE PROGRAMS that college football fans follow, even if they have never set foot on campus. Clemson has also won regular season or conference titles in baseball, golf and women’s trance and field since 2016. The Tigers have also made the NCAA Tournament in men’s basketball (and NIT) and men’s and women’s soccer since then.

There’s over 123,000 Clemson alumni registered in LinkedIn.com, nearly 53,000 living in or around Greenville, Charlotte and Charleston. You’d have no problem finding a watch party if you live in the Atlanta area (over 7,000 alumni) or even around New York or Washington DC (around 3,500 alumni apiece). But Philadelphia did not appear among the top cities in terms of numbers.

Who should choose Clemson?

Outside of South Carolina residents, I would say anyone who wants to attend a high-profile state school, but cannot get into the most selective southern universities such as UVa, Georgia Tech, the University of Georgia or UNC-Chapel Hill would like Clemson. But if costs are a concern, and you come from outside South Carolina, there are less expensive options that get you almost everything you will find at Clemson, except the football team.