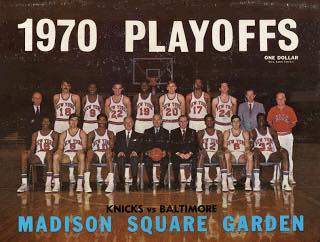 When I was nine I was a big fan of pro basketball. I had good reason back then. The New York Knicks, one of the NBA’s original teams, won their first championship. Today I read about a divided country. But I also look back on a team of black and white men united behind a Jewish head coach. Pro basketball fans can talk all they want about the great Bulls, Celtics, Lakers, Spurs and Warriors teams. But the 1970 Knicks are my pro basketball team.

As a college admissions advisor, I must also consider that all twelve Knicks played four years in college. A player had to wait until after his senior season to turn pro. The rival American Basketball Association had only one player, Spencer Haywood, a member of the 1968 US Olympic team, who had left college early. Haywood would later try to change leagues. To do so, he had to go to court—because the NBA did not allow players to leave college early.

I have met two members of the 1970 Knicks, Bill Bradley and Willis Reed. ‘Dollar Bill’, as Bradley was called when he played, got my vote all three times he ran for the US Senate. Thanks to a Rutgers trip my freshman year, I got to meet him in his Senate office in Washington. In addition to Bradley, who was a Rhodes Scholar after graduating from Princeton, other Knicks had some interesting backstories.

What are their stories?

Willis Reed, the Knicks leading scorer that season, became an assistant coach, head coach and NBA executive after he retired as a player. He entered the NBA in 1964 after graduating from Grambling University (LA) with a degree in Physical Education. I remember Reed limping on to the court, ready to play Game 7 of the 1970 championship series against the Lakers. He scored only four points but his presence meant more as the Knicks won 113-99.

Walt “Clyde” Frazier was to pro basketball what Joe Namath was to pro football. He set new standards for fashion while he set high standards for scoring and defense on the court. He was also the first pro basketball player to have a shoe named for him, the Puma Clyde. In 1967, he led his alma mater, Southern Illinois University, to the NIT Championship. That would be the last college basketball game played at the old Madison Square Garden.  His first home game in pro basketball would be at the new one.

Dick Barnett earned a PhD in Sports Management at Fordham University. He went on to be a college professor and author. Drafted after graduating from Tennessee State in 1959, Barnett would jump leagues two years later. He joined the Cleveland Pipers of the long-defunct American Basketball League to play for his college coach John McLendon. As a Piper, he was the first free agent ever signed by George Steinbrenner. Barnett and McLendon, the first black man to coach a pro basketball team, were later inducted into the College Basketball Hall of Fame.

Dave DeBusschere was a two-sport athlete who played at the University of Detroit (now Detroit-Mercy). A pitcher for the Chicago White Sox in 1962 and 1963, DeBusschere began his pro basketball career with the Detroit Pistons. In 1964 he was named player-coach, the youngest in NBA history. DeBusschere later became general manager of the ABA’s New York Nets, now the Brooklyn Nets of the NBA. One year later, he would be ABA Commissioner. He helped bring the Nets, Denver Nuggets, Indiana Pacers and the San Antonio Spurs into the NBA.

Phil Jackson was drafted by the Knicks the year before. But he missed the championship season due to spinal fusion surgery. He went on to coach the Chicago Bulls and Los Angeles Lakers to 11 NBA championships. Jackson is not only one of the most successful coaches in NBA history; he also won a title in the minor league Continental Basketball Association (CBA). A philosophy major at the University of North Dakota, Jackson received an honorary degree while coaching the Lakers.

Reserve players Nate Bowman and Dave Stallworth were college teammates at Wichita State University. They not only won championship rings with the Knicks; they also played together in the 1965 NCAA Final Four.  The Shockers would go on to lose to UCLA, the eventual National Champion in their first game. UCLA had to get by Cazzie Russell, a future member of the 1970 Knicks, and his Michigan Wolverine teammates to win the title. The fourth team in that Final Four: Princeton, led by Bill Bradley. Like Jackson, Russell would go on to win a CBA title as a head coach. But unlike Jackson, he suited up to play in the championship game. Just like Willis Reed did in 1970.

Reserves Bill Hosket and Don May were Ohio high school teammates. A member of the 1968 US Olympic Team, Hosket earned his degree from Ohio State, earning honors in academics as well as basketball. He would go on to become the first executive director of the Ohio State High School Athletic Association Foundation.  May would take the 1967 University of Dayton Flyers to the NCAA title game, losing to UCLA. The following year May led the Flyers to the NIT title over Kansas.

The last two reserves on this team, Mike Riordan and John Warren, were native New Yorkers. Riordan, who hailed from Long Island, played for Providence College. He was a 12th round pick of the Knicks in 1967—the draft is only two rounds today—and hung on to play for a decade. Warren, who came from Queens, played for hometown St. John’s University. He played only one season for the Knicks, the championship season, then he became one of the original Cleveland Cavaliers. Warren would be one of only two players to play every game for his new team.

These 12 men, most with college degrees, played during one of the greatest times to be a New York sports fan. They are one of the best examples that I can find of black and white men united behind a common goal. America needs their example, and more like it.