Who Were My College Advisors?

The field of college admissions counseling is fairly new. Most of us did not have the benefit of working with college advisors when we were applying to colleges. I was actually lucky I had two, my parents.

My father passed away last week. He previously survived a heart attack and a stroke, but lost a battle to cancer at 88. My mother lost her battle 41 years before.

I cannot think about my father without thinking about my mother, how they got me on my journey to college, and got me through. They were my college advisors. In some ways they still are.

Born in Brooklyn, raised by a single mother, my father went to NYU on an ROTC scholarship. He earned a Bachelor’s in Chemical Engineering, one of only seven in his class. He met my mother after he returned to New York from military service, married her about a month after she graduated from college. After leaving the Army he worked in the electronics industry for most of his career, overseeing the manufacturing of parts for television sets as well as the earliest desktop computers. My father won many awards in his career, most notably the television sets that came into our house. They ranged from the earliest table-top black and whites to huge color sets with wooden cabinets. I cannot tell you anything about how a TV works. But I can talk for hours about the evolution of the electronics industry and the broadcast media.

My mother was born in Vienna, Austria. She and her family left the country as Adolf Hitler rose to power and settled in New York City. My mother graduated third in her class at Hunter College High School, then she earned a degree in Art from Brooklyn College. She taught Hebrew school and subbed in the public schools. Had she not passed away at 43, my mother would have earned a teaching certification and taught Art and Social Studies full time. The synagogue where she taught, Temple Emanuel in Westfield, New Jersey, named a scholarship for her. She taught me how to draw. My dream occupation was to design cars. But there were only three companies that hired designers back in the early 70s. That did not stop my mother from challenging me to draw better.

My parents were among the families that founded our synagogue, Temple Shalom in Matawan, New Jersey. My father was the secretary of the congregation as it moved from  classrooms in a local elementary school to its own building. A licensed engineer, my father helped oversee its construction. My mother was the sisterhood president and also taught social studies in the elementary grades. My brother and I went to Hebrew school through the tenth grade because our parents pushed us through, even when we didn’t want to go. My father was also involved with Junior Achievement through his employer, RCA, to encourage young people to study engineering and science. He probably had an easier time with those kids than he did with my brother or me. While both of us like cars, neither of us wanted to be an engineer.

Their educational backgrounds could not have been more different. But somehow my parents made them work in a marriage that lasted 22 years. My father learned photography not only because he enjoyed having the latest camera, but also because it was a hobby that he could share with his wife. My parents also had an appreciation for history, a part of almost every vacation that we took as a family. More important, I had a father who could help me with my math and science homework, and a mother who could help me with writing, social studies and art. Their talents, more than anything else, helped me get through middle school and high school.

One might think that I was always smart coming from a family like that. But I was far from the most popular or accomplished child. I had thick glasses, virtually no athletic ability, and I complained a lot. I did not like school until  the fifth grade. There I had three very good teachers who made me believe that I could do better in the classroom. Until then my mother had a frustrating time dealing with me and my teachers. But as I got older, and earned better grades, she fought for me versus teachers and guidance counselors. She always won.

My brother and I got involved in speech and theatre from the eighth grade on, and my parents came to every play, whether we were cast or crew. When our teachers went on strike during my last year in high school, my parents  helped prepare  my brother and I before our first speech tournament of the school year, and they helped everyone else on our team who came over to our house. Our families pooled the money to pay the registration fee and drove us to and from the tournament, where we took first place.. My parents were opposed to the teacher’s strike, but told us not to take it out on the teachers. Winning was our quiet protest.

I grew up in one school system from kindergarten through high school.  I wanted to go to college where I could meet other people from other places. But my parents told me that Rutgers was a better option. Go there, they told me, then go to graduate school anywhere you want. Until I took the SATs I was resistant. But it took me three tries to get the average scores for Rutgers, so I never seriously looked at another school. That was probably best; my mother passed away the following spring.

After my mother died, my father told me that he would honor his promises to help pay for college. That had to be a struggle. Midway through my first semester I received a message to go to the financial aid office. I was handed a notice: I had received aid to cover full tuition and fees. My father had gone to the financial aid office without my knowing. He had helped me get a summer job before I started school, but I’m sure he realized that might not be enough.

I’ll always be grateful to my father, my mother and to Rutgers. They made it possible for me to go to graduate school shortly after I earned my bachelor’s degree. My father wished that I would reconsider and go to work, but let me do what I wanted to do, and told me not to quit once I committed to it. I earned my first masters in urban planning, thanks in part to my parents.  I wanted to combine art and social science, even if I had to learn a little math and science along the way.

I have had the privilege to work with students who had similar college advisors. They help keep me thinking so that they can make a well-informed decision.

But I would not be able to do this job if I did not have the college advisors that I had at home.

I have to thank them for getting me there.

Thanks Mom and Dad. 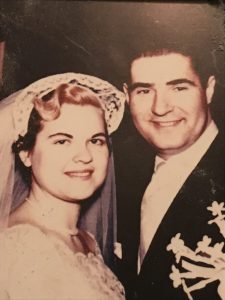