During my recent trip to the Providence metro area, I got to spend almost a full day at Bryant University. Bryant is located in Smithfield, a nearby suburb. The campus, which opened in 1971, was built on land donated by Earl Tupper. A Bryant alum, he was the inventor of Tupperware, and founder of the company of the same name. The university’s Bulldog mascot, Tupper II, is also named for him.

Bryant’s campus felt like an upscale version of Ramapo College of New Jersey, a public college I’ve visited many times.

Both campuses resemble corporate office parks with plenty of green space and water as well as an arch at the center. Bryant’s campus is more spread out, with plenty of parking for every sophomore on up. These schools share the same tradition where graduating students walk under the arch (see below) on commencement day.  Bryant takes the tradition a little further. Campus lore states that its bad luck to walk under the arch until you graduate. Even the housing designs and options are similar, though Bryant looks and feels like a much more expensive school, which it is. This was one campus where I believed that I would attract dirty looks if I dropped a chewing gum wrapper on a sidewalk or left food trays or wrappers behind on a table. I found a few posts on Pinterest that you can check out. 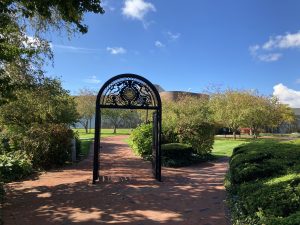 Bryant University has around 3,400 undergraduates and most live on campus.

It’s quite easy to live on campus and pick up the public bus to travel into Providence, or get to the beach at Narragansett Bay. The Rhode Island Public Transit Authority (RIPTA) makes that possible for free, just by showing a student ID. There are many activities on campus too, though Greek social life is not popular. It attracts less than ten percent of the men and less than 15 percent of the women, and these organizations do not have their own houses.

Bryant’s location and easy access to public transportation makes it possible for Bryant students to hold internships during the academic year. However, Providence is a competitive labor market for interns. Bulldogs will compete for positions with students from Brown, Johnson & Wales, Providence and Rhode Island College, and each of these schools have more undergrads.  Fortunately, there are more than 10,000 Bryant alumni in the Providence area registered in LinkedIn.com, among many others, who can help. Bryant also has large alumni bases in the Boston, New York and Hartford metro areas.

This school competes in 25 NCAA D-1 (scholarship) varsity sports, including football. That’s more sports than any state school in New England. Given the size of the student body, you’re more likely to run into scholarship athletes in the residences, dining hall and classes that you would at many other D-1 schools in New England. However, Bryant competes in the Northeast Conference, a lower-profile sports conference than the America East, Atlantic 10, Big East, or Patriot League, all conferences that have New England schools as members. The Bulldogs have won three conference championships in baseball, five in men’s lacrosse, two in women’s lacrosse and five in men’s tennis.

Business education is at the heart of every Bryant University degree.

Bryant University is a great school for someone who is undecided between a business or liberal arts major.

You can start in one college of this school and easily finish in the other. Every first-year student must complete a five-course Gateway Experience while taking introductory courses in their possible majors. The Gateway Experience is part business exploratory program, part instruction in leadership development and design thinking which could be applied to virtually any other major. Bryant also has liberal arts distribution requirements much like other colleges. However, these could be “double dipped” into possible minors or second majors. The two students who hosted me at Bryant carried more than one major and more than one minor. The sciences are becoming more popular at Bryant in the Health Sciences and well as Science and Technology.

What do I like about Bryant University’s academic model?

Bryant attracts mainly a B/B+/1200 SAT/27 ACT student who might otherwise consider a state university.  The profile is similar to the University of New Hampshire (UNH) or the University of Rhode Island (URI). However, large public schools prefer that prospective business students start their education in the business school, then transfer out if they do not like the educational experience. An internal transfer into the business school at UNH or URI, among other state schools, is tied to grades in college-level courses in Economics, Mathematics and Statistics, and possibly Accounting. Get below a 3.0 in these courses, and the transfer request could be denied. Bryant’s Gateway approach gives first-year students more time to think about a major in either business or liberal arts before having to commit to one.

Bryant’s Gateway experience and approach to business minors also provides every student, regardless of major, with relevant skill sets. This school offers 12 business minors that could be coupled with a liberal arts major. URI, by comparison, offers five. UNH offers seven. UMass-Amherst offers only one, in General Business. A business student can complete a liberal arts minor in subjects such as Biotechnology, Chinese or Communications to add skills.

Bentley University, which I covered virtually during the pandemic year,  follows a similar academic model. But it’s a more expensive and more selective school within the more competitive Boston internship and job market. I’m not sure that a full pay student who could gain admission to both schools would get more from Bentley. But a student who is near the top of Bentley’s applicant pool might receive a merit scholarship to Bryant.

Bryant University has received many high rankings from the media. I subscribe to Poets and Quants for Undergrads. There, Bryant appears in some less recent articles. In 2014, Bryant’s undergraduate business program ranked among the top 50 feeder schools for candidates to the most selective MBA programs.

However, the more relevant measures are freshman retention and graduation rates. Bryant retained 89 percent of the freshmen who entered in 2019. Seventy-nine percent of Bryant students who entered in 2014, the latest year data was available, finished in four years. The four-year graduation rate is better than all but four public universities in the US as well as many private schools. So, I would say yes, the model works very well for the students that Bryant University attracts.

Are there downsides to this experience?

It’s expensive. The estimated total cost of attendance for a student living on campus is close to $66,000. The largest merit scholarship is $35,000 which should cover at least half of the costs each year for three of the four years. If you earn that award, Bryant might undercut Neighboring State U if you live in New England or the Mid-Atlantic states. But it is unlikely to match Home State U, unless you’re a recruited athlete on full scholarship.

The uniqueness of the freshman Gateway experience has many pluses–as long as you stay at Bryant all the way to your degree. However, the five major first-year courses are unique to Bryant, and may not transfer over to another institution if you are not happy.

Bryant offers a great educational experience for anyone who has even a curiosity about business. The educational model, career services and alumni network are strong enough to help a motivated student find their passion as well as the best jobs to fulfill it. However, you have to be ready to pay for it.