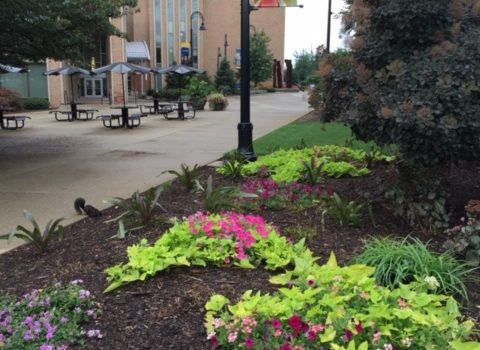 My very first post-pandemic school visit was to Kent State University (OH). I’ve always been curious about Kent State since researching a novel, Defending College Heights, and learning about the events before, during and immediately after May 4, 1970.  I wrote that story five years  before becoming a college admissions advisor.  It was a happy circumstance that I could visit Kent State on route to other colleges near Cleveland. I’ve gathered a few photos on Pinterest  and invite you to read on. My UCLA teacher, and friend, Julia Varriale, came to my rescue with the photo of the library and its accompanying plaza above, after my phone-computer connection let me down.

Kent State’s 950 acre main campus is the third-largest public university in Ohio. It’s also the largest college in the Akron-Canton-Cleveland metro area. There are more than 20,000 undergrads and over 5,000 grad students, more than the University of Delaware and more than every New England flagship state school, excluding UMass-Amherst. The university is residential, with most of the freshmen (pre-pandemic), and over 30 percent of the undergrads (ditto), living on campus. The size of the student body alone helps to make Kent, Ohio a true college town. This campus has a couple of interesting traditions of its own: the fall Black Squirrel Festival as well as the end of year Flash Fest.

Kent State’s main campus gets nearly a fifth of its freshmen from other states through academics.

The university draws especially well from New Jersey as well as the Buffalo, Pittsburgh and the ‘DelMarVa’ area. The academic options might be the best reason why.

There are more majors, over 280, than you will find at much larger schools, including Ohio State. Some, like Aeronautics, Architecture, Aviation (several options), Fashion Design and Merchandising, Musical Theatre, Insurance, Radiologic Imaging Sciences and Speech Pathology and Audiology  are tough to find anywhere. Kent State has also produced 40 percent of the practicing nurses in the Akron-Cleveland area, including those who work at the globally renown Cleveland Clinic. The Design Innovation Hub, scheduled to open this fall, will enable students in many majors to turn ideas into tangible products.

I took a virtual tour of the School of Fashion before my visit and was blown away by the resources available to their students. Their students can also study-away in New York City. The resources for Aeronautics are impressive, too. I got a personal tour of the facilities for the Aeronautics and Aviation Management programs. They have a fleet of 30 small planes as well as flight simulators. The university is also developing an Aircraft Maintenance program .

It’s easy to imagine Kent State being cross-shopped against many schools.

Given the academic options, you can run into students who also applied to schools in the Big Ten as well as Embry-Riddle and Fashion Institute of Technology. The non-resident charges for tuition and fees are around $20,300 for the coming academic year. Indiana and Michigan State would have to come through with half-tuition scholarships just to match Kent State’s sticker price.

Kent State’s non-resident merit awards are small. But they still make the school price competitive vs. in-state public options for a New Jersey resident. Ohio residents face an estimated total cost of attendance, including tuition and fees below $12,000, of just below $30,000. The university guarantees that resident charges for tuition and fees as well as room and board will remain the same from the freshman year through the senior year.  It’s possible to live off campus for less than $600/month, including rent and utilities.

About 30 percent of the students who graduated from Kent State in 2020 had no student loan debt. But those who borrowed owed, on average, close to $32,000. This is partly a reflection of students who need more time to finish their degree.

Kent State loses about a fifth of a freshman class and most recently graduated half of its freshmen on time.

That might not sound impressive compared to Miami of Ohio or Ohio State. But success must be considered in perspective. As recently as 15 years ago this school lost nearly 30 percent of a freshman class. Only a quarter of the freshmen classes that entered from 2001 to 2005 graduated within four years. At the same time the university has welcomed more freshmen. In 2001 there were just under 3,600 freshmen. In 2016 there were 4,300. The number stayed at that level for another three years. The number recently slipped to 3,800, likely due to the pandemic. It’s likely to rise again, given the costs and greater desire for students seeking a public college option to remain closer to home.

It’s not hard to get into most majors at Kent State though several will be quite competitive.

Kent State went test optional during the last cycle. Test scores went from ‘Very Important’ to ‘Considered’ when I compared the last two Common Data Sets (2019-20 and 2020-21). The average high school GPA for entering freshmen last year was a 3.6. Applicants with an SAT of 1250 or better, or an ACT of 27 or better, combined with excellent grades (3.7+) and well-written essays could probably get serious consideration for the Honors College. That’s something to think about if you’re shopping Kent State against Ohio State, where you would be more of a number, or a more expensive private school. However, admissions to programs such as Aeronautics, Architecture, Aviation, Fashion Design and Merchandising, Musical Theatre, Nursing, Radiologic Imaging Sciences and Speech Pathology and Audiology will be more competitive because of their popularity.

Kent State’s campus looks newer than the university actually is.

Kent State first opened its main campus in 1910. Yet when you take an in-person or virtual tour, you might believe this is a much newer school. Only five buildings, Moulton, White, Rockwell (major interior renovation),  the May-Prentice House and Franklin appear to have lines that date before the 1960s. The multi-story library reminded me of UMass-Amherst, but in bright yellow instead of the UMass dark red.

The May 4 Visitors Center was closed for technology upgrades when I was on campus. I recommend a visit after it re-opens.The university, to its credit, has not run away from the memories of a tragic shooting where four students were shot and killed by National Guard troops and nine were wounded. Rather it has tried to advance a greater good. That impressed me, given the political climate in Ohio, a state more conservative than New Jersey, as well as our country as I write this today.

Kent State was perceived to be to the “hippie school” of Ohio for at least two decades following the tragic events on May 4, 1970. However, while the community has some of the shops that one might find in a “liberal” college town as well as liberal-leaning students, it has developed a stronger reputation for the academic options.

Beauty is in the eye of the beholder when you visit a college campus.

This one is clean and well maintained. The road network is quite straightforward. It’s quite easy to get from campus into downtown Kent. A new student could find their way around town and campus in less than a week. There’s plenty of green space, though I wish there was more shade trees in the residential and academic quads. I did not believe that students would need a car on this campus unless they wanted to drive to Cleveland or go home, quite likely within Northeast Ohio. However, the residential community, from what students told me, tends to stay on or close to campus.

Kent State houses around 30 percent of its students, including 80 percent of the freshmen, with some very nice options and living-learning programs. The university did not disclose the percentage of students engaged in Greek social fraternities and sororities. One suggestion that was given during my visit: live in a predominantly freshman hall for the freshman year to make friends to find housing for sophomore year and beyond.

The Golden Flashes compete in the Mid-America Conference (MAC), with natural rivalries against other Ohio (Akron, Bowling Green, Ohio University, Miami of Ohio) schools as well as SUNY-Buffalo, and regional public universities in Illinois and neighboring states. Ohio is a football crazy state. Kent State won it’s first bowl game ever in 2019, a 51-41 win over Utah State. Yet the school averaged fewer than 13,000 fans for its home games in a 25,000 seat stadium, below average for the conference. The most successful sports programs are women’s field hockey and men’s and women’s golf, though the men’s basketball program has not had a losing season since 1998.

Winning the MAC title in football won’t qualify a team for the College Football Playoff. But Kent State gets its chance to play high-profile rivals in the Big Ten, among other conferences–as long as they’re willing to play on the road. This coming season Kent State will play Texas A&M, Maryland and Iowa on the road. Next year the Golden Flashes will travel to Oklahoma, Georgia and Washington. The last time they beat a ‘power conference’ school? That was 2012 when Rutgers was in the Big East. The Golden Flashes beat the then-unbeaten (7-0) Scarlet Knights 35-23. I was there as Rutgers’ quarterback completed six passes—-to Kent State’s defense.

Yet the university has some high-profile athletic alumni

Golden Flashes have a larger presence than I first thought

It’s no surprise that most of the 156,000 Kent State alumni registered in LinkedIn.com are based in Ohio. But there also also nearly 3,800 in/around Pittsburgh, over 3,700 in/round New York City and nearly 2,600 in/around Washington DC. There were also more than 1,300 in/around Chicago, Atlanta, Los Angeles, San Francisco, Charlotte and Dallas-Ft. Worth. If the Golden Flashes get into another bowl game or the NCAA Men’s Basketball tournament–they got to the Elite Eight in 2002–there will be enough fans for a nice watch party in many cities. And there are acclaimed alumni who are not athletes. Actors Arsenio Hall, Drew Carey, Steve Harvey, Michael Keaton and John DeLancie (‘Q’ in Star Trek, The Next Generation and Star Trek Voyager) and author/journalist Connie Schultz are Golden Flashes.

I saw a lot to recommend Kent State, mainly the academics and the residential look and feel of the campus. This is not a spirit and sports school. But that’s not why people choose it, unless they’re recruited athletes. Visually, the school reminded me of U-Mass-Amherst and SUNY-Buffalo, concrete and glass–but with a more cheerful color palate. More important,  Kent State hits the target for the cost conscious student who is looking for a fair chance to succeed in a major that’s also offered at the big flagship. Very few public universities in our country take on that challenge. More should.