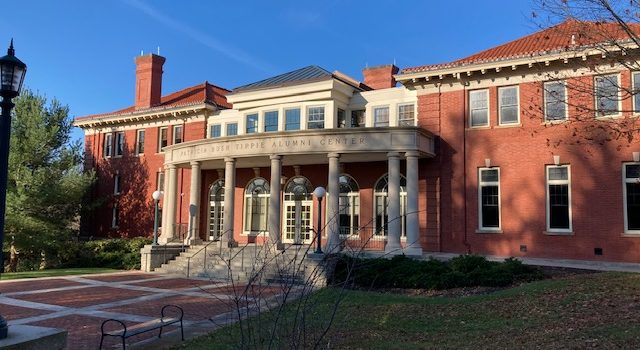 Getting to Know Allegheny College (PA)-Again

I was invited to be part of a counselor fly-in at Allegheny College, one of the Colleges That Change Lives. This was my second visit to the school. My first was an Open House from the parent and prospective student viewpoint. This one covered some topics that you don’t usually see at an Open House, such as a tour and orientation talk about the campus community.

Allegheny College is mentioned in my book, The Good College.

The college got into the book because it does quite well with the students it attracts. Freshman retention rates have ranged between 82 and 90 percent since 1990. No less than 70 percent of a freshman class has graduated on time since 1994. That’s better than any of the flagship state schools in Pennsylvania, including the University of Pittsburgh, aka “Pitt’..

Most recently, 2021 graduates who took out loans owed just over $25,000. That’s $2,000 less than the maximum they could have borrowed under the Federal Student Loan program. It’s also less than the graduates from Pennsylvania might have owed to go to Penn State or Pitt. That’s a huge plus for a private liberal arts college within a state that has the largest selection of liberal arts colleges in the US. But unlike the more selective of these schools, just over half of the students come from Pennsylvania.

Colleges That Change Lives, including Allegheny, are not necessarily selective schools. However, several have a history of helping students achieve at the same heights as their peers who chose colleges that turn more people away. These benefits include a well-developed student success system as well as a challenging senior project.  Allegheny has placed its student success function in the library; it’s quite difficult to miss. They also have a grants program to help in special situations. The next step that I read about in The Campus, the student paper, is to have a student services hub in the student center. This is one of the better small college papers I have read. Take copies with you after your visit. 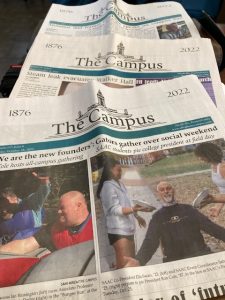 Being one of the oldest colleges in the country (founded 1815), Allegheny has an eclectic mix of 19th and 20th century buildings. This school has relied more on renovations than new construction as it tries to improve the quality of life for students. I dropped two photos of the rec center below. 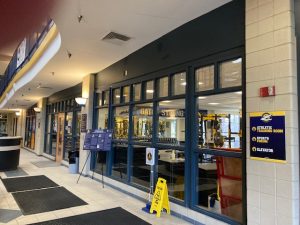 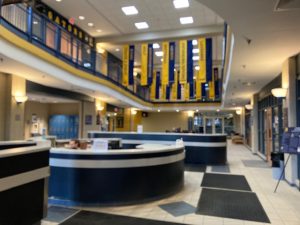 The campus shows very well vs. other Pennsylvania and Ohio liberal arts colleges that have more selective admissions. If I was considering Allegheny versus those schools, I would feel that I would get no less from the visual experience, although Northwestern Pennsylvania is colder than Southeastern Pennsylvania. However, it’s a bit of a schlepp to walk into the downtown from campus. Other schools such as Dickinson and Gettysburg have their downtowns within easy walking distance. However, their local and regional economies are tied more to tourism.

Allegheny College has just under 1,500 students, all undergraduates.

That’s a drop of about 700 since 2012, according to the college’s Office of Institutional Research. At the same time the college has become more diverse. At the end of 2013, students of color made up 16 percent of the student body. This past spring they were 24 percent. About a third of the student body was in social fraternities and sororities two decades ago. It’s down to about 20 percent now.

Generous aid has helped attract new students. The average freshman need-based scholarship for the Class of 2025 was $40,300. That equaled 60 precent of the college’s estimated total cost of attendance. Just over a fifth of the class received merit-based awards of just over $35,000, just over half of the estimated total cost of attendance. These awards came before loans or jobs and I have no doubt that some students received need-based and merit-based aid.

Test-optional since 2016, Allegheny draws a B+/A- student. The middle 50 percent who submit scores tend to hit a range slightly below Rutgers, Penn State or Pitt.  Prospective students who have strong grades and rigor, but not the scores, can still get merit aid. There are also supplemental awards for students who will voluntarily continue in the visual and performing arts. Families that have public college budgets but would prefer a more personal approach to education at a smaller school should not be afraid to apply to Allegheny, if they like what they see on a virtual or in-person visit.

Every student declares a major in one division as well as a minor in another. They must also take at least one course in the other four. Every student must also take a Freshman Seminar and Junior Seminar; the latter dovetails into a Senior Project called a “Senior Comp,” regardless of their grade point average. Seniors are motivated to “Chomp the Comp,” a play on the college’s alligator mascot. The college offers students the option of a Bachelor of Arts or a Bachelor of Science degree, depending on the chosen major. You’re not likely to have a class with more than 29 students here, even at the introductory level.

In effect it places more pressure on freshmen and sophomores to set a direction so that they can also graduate on time. The college helps the decision-making process through Gator Days, one weekday set aside every semester. Classes are cancelled on Gator Days as are all athletic and extracurricular programs. A full day of academic and career-related programming is scheduled in their place. This school appears to really make its students work to earn their degree. But at the same time it really tries to bond a community where everyone lives on campus, unless they are studying away. About a third of Allegheny students are D-III varsity athletes and club sports are popular extracurricular activities. But I don’t think this school bonds around athletics beyond friends cheering on friends.

There are several interesting majors and minors that you would not expect to find at a Liberal arts school.

These include majors in Integrative Informatics and Art, Science and Innovation as well as minors in Energy and Society, Environmental Writing, Dance and Movement Studies and Film and Digital Storytelling. I felt the biological and environmental sciences were a strength as were art and communications. There are also more clear paths into graduate and professional schools than you will find at other liberal arts colleges.

Allegheny College is trying to turn its location to advantage.

Liberal arts colleges, including Allegheny, have taken some serious lumps in recent years, especially if they are not close to major cities. Allegheny College is approximately 90 minutes from Pittsburgh and two and a half hours from Cleveland by car.

Geographically, some might say that that Meadville and the surrounding region are where the Northeastern US meets the Midwest. However, the community is known as Tool City, a home of tool and die manufacturing. Cars and planes are not made in Meadville, but local firms make small, precision parts that go inside them. The county recently voted for the more conservative candidates for Governor and US Senator. One could believe that there would be friction between students and residents, given the likely differences in politics and preferred entertainment. But the college and community are really trying to work together.

Allegheny students can earn skill based badges and work with area employers through the Allegheny Lab for Innovation and Creativity (ALIC). This center, which will be expanded in a new location on campus, initially combined art and computer science. It will soon blend disciplines to create new majors, minors and certificates, including a program in industrial design. ALIC has its own computer lab, fabrication lab and art gallery.  It’s a unique idea that uses design thinking to solve business, policy, social and science problems.

The college also hired Meadville’s former city manager to help the college and community partner to revitalize the downtown as well as create more opportunities for community engagement . Meadville is a small town with 13,000 residents. However, the downtown has the oldest continuously run city market in the state of Pennsylvania as well as a nicely restored public library and performing arts center along with several women-owned retail and dining businesses.

Allegheny College appears to be a school where the administration says: “if it doesn’t cost much and fixes a problem for our students, let’s do it quickly. ” That’s a great attitude to have when your school faces so much competition for new students. At the same time there are also big-picture ideas that show considerable promise.

It’s really hard for me to fault the school, since it does what a Good College is supposed to do. However, it really helps to be intellectually curious and service minded because of the college’s rigor and community initiatives. It also helps to have access to a car.

Learn more about me at ‘Tests and the Rest’ with Amy Seeley and Mike Bergin !