Getting to Know: Boston University

I finally got a chance to visit Boston University (BU) in person; the pandemic cancelled my plans to come more than two years ago.  BU is a very popular choice for many college bound high school students in Central New Jersey and Southeastern Pennsylvania.  I’ve gathered some photos on Pinterest and  I also liked the Indian Maniac tour of BU  You might, too.

Those who get into Boston University tend to stay and finish.

BU’s most recent freshman retention rate was 94 percent and that happened during the pandemic. The most recent four-year grad I could find was 84 percent for the Class of 2019. That’s excellent as well.

Less than 20 percent get in. There’s some advantage to applying Early Decision (ED). Thirty-two percent of ED applicants for the Class of 2025 got accepted.However, it is not possible to find data by schools. The most recent yield rate, the percentage of accepted students who deposit, was 28 percent. That includes those admitted ED who made up 45 percent of the class. My hunch is that those who were accepted Regular Decision were considering BU versus more selective or less expensive schools, and BU came up wanting.

The programs in Business, Communications, Engineering, Fine Arts and Health & Rehabilitative Sciences are likely to be more selective than the College of Arts & Sciences or the College of General Studies. The Computing and Data Sciences school (photo below) is relatively new, and its headquarters is under construction. But admissions are likely to become increasingly competitive, given the need for professionals in the Boston area. 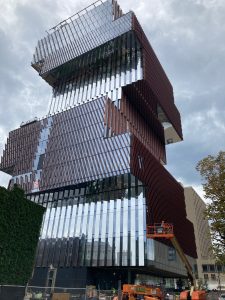 Next, I will offer a few observations about BU from my virtual and in-person visits.

Boston University has a contiguous campus.

You’ll know when you’ve arrived and when you’ve left. Other big-city schools like GW and NYU have campus buildings mixed with private residences, retail shops, restaurants and office buildings. It’s hard to see where the campus begins or ends. Some people feel safer when they know that campus is campus, community is community.

Boston University’s campus is about the twice the acreage of Northeastern’s (140 vs. 73), so doesn’t feel as crowded.like other city schools where students mix with people on their way home, to work, or other places. It feels more campus-like than GW, which actually has fewer students, or NYU which has more. BU is also greener with a “beach”  than either GW or NYU.

If you can make your way to Commonwealth Avenue, you’ll learn the Boston University campus from East to Central to West pretty quickly.

It made me think of Penn, which I have visited often. But the main pedestrian streets at Penn, Locust Walk and Walnut Street, are friendlier for walking. You must watch out for the cars, bikes and trolley’s as you run or walk down Commonwealth Avenue (photo up top). But it’s also quite easy to get around the city from there via Lyft, Uber or public transportation. And if you love baseball, it’s easy to get to Fenway Park on foot.

Boston University is more residential than other popular urban universities.

Seventy-five percent of BU undergrads live on campus. Eighty percent are on campus over the weekends.  Most freshmen will live on the West Campus. The big plus for West Campus, besides the location, is the dining hall, where you don’t have to go outside. The numbers contrast greatly with Northeastern where less than half of the students dorm on campus. BU is also more residential than NYU (42%), GW (60%), Penn (51%) or Southern Cal (30%).

I took a video tour of the student housing at BU.  If you were not a BU student you would pay a fortune to live in the same neighborhood, and live in housing that’s not as nice. Boston University has a three year residency requirement, so the on-campus living options should be a factor in having this school on your list.

It’s best to live on campus for the fourth year, if you can.

Boston is one of the most expensive rental housing markets in the America. Not only will students compete with peers attending other colleges in the city; they also need to compete with working people for housing. BostonPads.com has some tips for college students seeking to live off campus.  The transit authority also offers discounted student semester passes, to get around the city, especially if you commute from another neighborhood. However, you need to get a new pass every semester.

Boston is a big reason that people choose BU.

It’s always been a great college town. But one caution: You’ll have a lot of competition when you’re seeking an internship. There’s more over 50 colleges in Boston and its immediate neighbors. Northeastern and Wentworth students on co-op will be your most likely competition for internships during the school year. So will MassArt students in the communication and film programs.  UMass-Boston, the large public university in the city, is also competition. Not to forget the schools close enough to the city: Bentley, Brandeis, Harvard, MIT and Tufts.

I totally understand that you want to be in “the city” for some majors.

There’s no place like New York when it comes to finance or media, and no place like Los Angeles when it comes to film and television. There’s only one nation’s capital for politics. Boston is a state capital, financial and media center as well as a cultural hub that also has major league sports. But so is Minneapolis.The University of Minnesota is a lot more affordable than BU, and it dominates the local market for interns. Not to mention that their Gophers play in the Big Ten, a much better sports entertainment experience.

Boston University has an expansive alumni base.

BU has nearly 90,000 alumni in and around Boston, who are registered in LinkedIn.com. That really helps in finding internship or a full-time job, though the community is smaller than Northeastern’s. But the university also has nearly 38,000 alumni in/around New York City as well as huge communities in San Francisco, Los Angeles, Washington DC, Philadelphia, Chicago, Seattle and the UK. If you’re an excellent student with an affinity with Boston, and hope to stay, Boston University might be your school. But the costs have to work out.

Boston University is expensive, but trying to be more affordable.

BU has made significant commitments to fill need that I have not seen at other private urban universities such as NYU or GW. So, I had to check out Boston University’s most recent Common Data Set to see how they lived up to these commitments. Among the 1,600 freshmen, the university determined to have need, nearly all received need-based scholarships that averaged over $54,000, about $4,000 less than full tuition and fees. On average, BU fulfilled 95 percent of need for the first-year students in the Class of 2025.

Boston University offers few merit scholarships. Only five percent of the more than 4,000 freshmen who entered in 2021 received a merit-based award. The average award did not cover half of their tuition and fees. Forty percent of the class of 2021 borrowed, on average, over $40,000 for their education.

I can see that the neediest students can graduate in decent financial shape. However, I also see that BU can be a financial stretch for many families shopping the school versus a better-endowed private university or Home State U. The costs are not worth the reach if you have financial worries.

There are many academic reasons to consider Boston University, as long as you can afford the school.

There’s over 300 undergraduate programs, more than you’ll find at much larger schools. But it really helps to know what you want to study.

You can enter undeclared–and over a third of entering freshmen do. But if you’re undecided between business, communications or engineering and a liberal arts major, you take risks if you try to switch into pre-professional programs. You can take the introductory courses, but you might face a minimum GPA requirement to make the switch. The BU Hub, the focal point for the university’s general education requirements, has 26 required units, but they can overlap into intended majors or minors.  Fortunately you can choose from several Communications and Engineering minors to pair with a liberal arts major. But you’ve got a choice of only two business minors: General Business or Entrepreneurship. Also, unique among larger schools, the core requirements in Arts and Sciences can be a minor unto themselves.

The main sport is men’s hockey.

Four 1980 Olympians, men who made miracles on ice, came from BU. They were team captain Mike Eruzione, Dave Silk, Jack O’Callahan, and goalie Jim Craig. Thirty-six hockey Terriers have played in the Olympics, 31 for the United States. They also face Boston College, Harvard and Northeastern each year for the Beanpot Trophy–and won it this past season. However, home attendance has trended downward since 2005-06. It’s really hard to call a school that averages less than 4,000 fans per home game in the most prominent sport a “spirit and sports” school. My hunch is that the professional teams, especially the Red Sox, are more of an attraction. BU and Northeastern students can get very cheap tickets to select Red Sox games.

It was easy for me to understand why so many college-bound students are attracted to Boston University. I felt that BU had a nicer campus and better residence life options than Northeastern while maintaining similar advantages in terms of getting around the city. Boston University, like Northeastern, also deserves praise for attempting to help its neediest applicants. But it still seems like a financial reach for many families who choose to come.