Getting To Know: Dickinson College (PA)-Again

After my visit to Susquehanna University I paid a re-visit to Dickinson College, the 16th oldest college in the US. I had visited Dickinson several years before. But I wanted to consider the school in a different light. I also updated my DickinsonCollege Pinterest page for you.

Dickinson College students appear to be happy with their school.

Freshman retention regularly exceeds 90 percent, excellent for a private liberal arts college. Seventy-eight percent of the students who entered in 2015 finished in four years. That, too, is excellent.

This school has one of the nicest rec centers (below left) that I have seen at a small college as well as one of the nicer libraries. Virtually everyone lives on campus, though seniors can ask to move off.  Two of the older housing options are below. However,  I felt that the dining hall and student center could use an interior update. 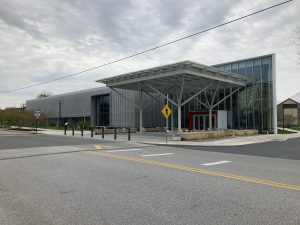 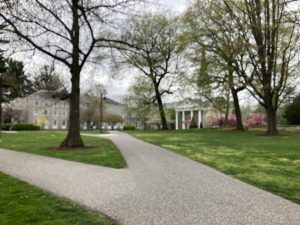 Downtown Carlisle is clean and there are some interesting stores and restaurants.

The previous time I was here I found a very nice independent bookstore near campus. But I felt that the social life at Dickinson was more likely to be campus based unless you had access to a car. There are more outdoor recreational opportunities in Central Pennsylvania than you might expect. But they are not close to the Dickinson campus. Philadelphia is less than two hours away; so are Baltimore and. Washington DC.

If you care about US News rankings, Dickinson ties for #50 in the top 50 with Union College, Connecticut College and Sewanee-University of the South. Within Central Pennsylvania, Dickinson ranks just ahead of Gettysburg (#54) but behind Franklin & Marshall (#42). These three schools are sports rivals and no more than 75 minutes from each other by car and they have about the same number of students.You’re not likely to have a large lecture class at any of these schools. But if you try to cover them in less than three days, you do yourself a disservice.

There are differences between each school that you should notice, even though some majors (Biological Sciences, Psychology, Business, Government or Political Science, International or Global Studies) are popular at all three. Dickinson is not as big on Greek social life as its closest sports rivals.. Less than five person of Dickinson men are involved in social fraternities although 25 percent of the women are in sororities. Thirty percent of Gettysburg men are fraternity members as are 12 percent of the men at Franklin & Marshall. While Dickinson has plenty of clubs and organizations, I did not get a sense that the school bonded around any common events or traditions around athletics or anything else.

A Dickinson College education is based on three perspectives: Global, Sustainability & Leadership

Dickinson College operates 18 study abroad programs of its own and offers instruction in 13 languages. About two-thirds of Dickinson students will have a study abroad experience over a semester or a year, including nearly half (44%) of the science majors. Study abroad experiences are immersive within a small city versus a large one. Dickinson students are more likely to try to improve their language skills and gain a truer knowledge of daily life in their host country..

The college also tries to help arrange internships abroad; more of these experiences are social and academic at other colleges. Dickinson was the eighth college in the US to commit to becoming carbon neutral. It also owns and operates a 180 acre farm that provides certified organic produce and has its own greenhouse (see below). The theme of sustainability is also widely promoted in the student center. There is also an emphasis on community service that has led the school to become one of the leading suppliers to talent to the Peace Corps. 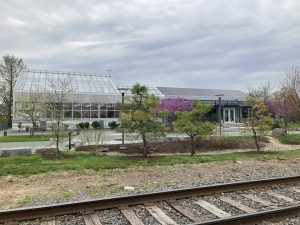 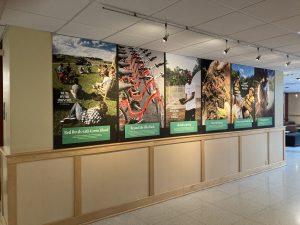 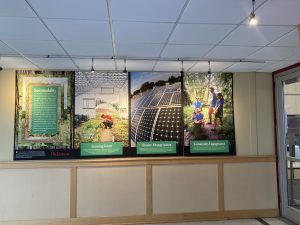 Most lead to one of 46 majors, others to certificates or admissions to a partner school. Some, like Astronomy or Journalism, are tough to find at a liberal arts college. Others such as International Studies are cross disciplinary. This school makes it quite easy to “double dip” to use general education requirements to add a second major or a minor. Every student is assigned an academic advisor and a career advisor at the start of their education.

Dickinson has some of the most comprehensive career development services (career center photo below) that I have seen at a liberal arts college. It is also a member of the Liberal Arts Career NetWORK, along with several other schools that prospective students will recognize. There are alumni communities of over 2,500 members in the New York and Philadelphia areas as well as the Baltimore-Washington Corridor registered in LinkedIn.com and over 1,300 in and around Boston. If you want to begin your career in the Northeast, you can make great connections through Dickinson before you graduate. 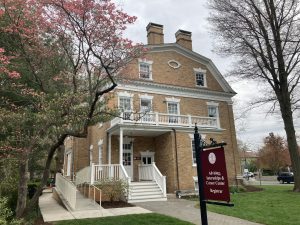 Admissions are test blind. Your ACT or SAT scores are not a factor in admissions. In addition, new for this cycle, prospective students can fill out a no-obligation “mini application” and “mini financial aid form.” This will give the student and their family an early read on their changes of acceptance and financial aid if they apply Early Decision.

Dickinson is not the only college that offers early insights. You can get them from Muhlenberg (PA),the College of Wooster (OH) and Whitman College (WA), too. But this is a really nice gesture given the uncertainty families face with college costs. This could also be a win for a school that filled 35 percent of the last freshman class through Early Decision.

Yet Dickinson is not ultra selective.

Dickinson College accepted 48 percent of the students who applied to join the Class of 2025, according to its most recent Common Data Set. However, the school also accepted 69 percent of the students who applied Early Decision. The college considers Demonstrated Interest to be Very Important. Genuine interest and knowledge of the school’s perspectives really helps, since they will govern an education for the next four years. The college reported that the middle 50 percent  of the Class of 2025 who submitted SAT scores scored between 1380 and 1470 though it did not report an average high school GPA.

Dickinson College tries to be affordable.

The college offers need-based as well as a merit-based awards and tries to meet 100 percent of demonstrated need. Merit scholarships that require no additional application range from $15,000 to $30,000 per year. The Presidential Scholarship, which is $35,000/year, requires a separate application. The scholarships also help cover costs towards a term of off-campus study in a college-sponsored programs. Last year, Dickinson’s direct charges (tuition and fees, room and board) approached $74,000.

It’s possible that a student who receives one of the larger awards might pay less than she would to go to Home State U or Neighboring State U if they come from a state like New Jersey or Pennsylvania where resident tuition and fees are high. The average student loan debt for 2021 graduates who took out loans was just over $28,000. That was $11,000 less than the average borrower owed Connecticut College, probably the most comparable New England liberal arts school.  It was also less than the average indebtedness incurred by borrowers who went to Gettysburg.

Dickinson had an endowment of over $600 million at the end of Fiscal Year 2021, according to the National Association of College & University Business Officers. The college’s endowment’s is not only larger than Franklin & Marshall or Gettysburg’s. It is also larger than some more selective liberal arts schools including Bates, Barnard and Connecticut College.

While other liberal arts colleges take global studies and sustainability quite seriously, few take it to the same levels as Dickinson. Among colleges that I have visited, only Oberlin, a better-endowed school  has shown a greater commitment to being carbon neutral. And, like Oberlin, I had a feeling that the Dickinson community would be more liberal than the surrounding area. I checked the Wikipedia page for Cumberland County, where Carlisle is the county seat, and learned that no Democratic presidential candidate has carried the county since Lyndon Johnson in 1964.

Dickinson’s acceptance rate does not reflect that the school is “easier to get into” versus other liberal arts colleges in New England, New York, Pennsylvania or Ohio as much as it reflects the student’s efforts to understand what they are getting into. The rigor and rewards from going to Dickinson are the same as they would be at the most selective schools. However, you need to buy into a unique educational model and the costs need to work out.