Georgian Court University (NJ) hosted a professional conference that I attended recently. I took advantage of the opportunity to take a campus tour. I’ve also gathered a few photos of the campus that you’ll find on Pinterest and dropped a few in here, too.

These three schools have become athletic rivals in NCAA D-2 scholarship sports. None have Greek social life. Over 90 percent of the students come from New Jersey and a fair percentage commute. Each school has also tried to grow by adding more pre-professional undergraduate degrees as well as graduate programs. All three schools are test optional, even for nursing, which is probably the most selective program on any campus. I previously covered test optional nursing admissions at Caldwell during the height of the COVID-19 pandemic.

What would be some of the advantages for choosing Georgian Court?

Georgian Court University and its sister New Jersey schools have survived because they offer smaller classes than the public colleges. Nearly 90 percent of all classes taught at Georgian Court have fewer than 20 students. The student-faculty ratio is 12 to 1. However, you are also likely to have adjuncts, especially in pre-professional majors, teaching your classes. However, the professionals in the pre-professional courses are also more likely to have real-world connections to help their students.

Forty percent of the undergraduate student body at Georgian Court is pursuing a major in the health professions. These include Nursing, Clinical Laboratory Science, Exercise Science, Health Information Science, Nursing and Psychiatric Rehabilitation and Psychology. Communications, Criminal Justice, Education, Psychology and Business offerings are quite extensive for a school that has only 1,600 undergraduates.

And what are Georgian Court students required to take?

Over a third of the credits towards a Georgian Court degree are required courses. The university has distributing requirements in writing, quantitative analysis, natural science, visual and performing arts and social sciences, much like any liberal arts colleges. However, there are additional requirements in religion, philosophy, ethics and women’s studies; the last is something I have not seen as a requirement at other colleges I have covered. There’s also a first-year seminar, a ‘Georgian Court 101’. as well as a Cornerstone Course and a Senior Capstone. All students graduate with an experiential learning opportunity for credit. That could be service learning, study abroad, an internship, clinical or practicum or independent research.

It’s probably possible to double dip the traditional general education courses into a chosen major or minor along with the experiential learning requirement. But it looks like you have to spread out the more unique general education requirements over the duration of your education.

How do the general education requirements work for someone who is transferring from another school?

It’s harder to graduate on time as a transfer student unless you know  for sure that you are coming to Georgian Court for your sophomore or junior year. This might be a better school to enter as a sophomore transfer, since some of the general education requirements are unique to Georgian Court, and some schools might not offer a Women’s Studies course that matches up with the university’s courses.

Georgian Court has articulation agreements with Brookdale Community College, which is in the adjacent county of Monmouth. as well as a Dual Admissions Agreement with Mercer County Community College, also in an adjacent county, that applies to several, but not all, of Georgian Court’s majors. However, the university does not have an articulation agreement with the community college in Ocean County, where Georgian Court’s campus is located.

Outside of academics options what makes Georgian Court University stand out?

Student bodies are unique from college to college, but Georgian Court is located in Lakewood, a Central New Jersey suburb that is not far from the beach communities in Belmar and Long Branch. With a population of around 100,000 people, Lakewood has grown to become the sixth-largest city in the Garden State. It is also one of the largest Orthodox Jewish communities in America,

Interstate 295, the major highway to the campus is easily accessible to the beach towns and the New Jersey Turnpike. It also connects to state parks and any chain movie, dining and shopping opportunity that you can imagine.  It really helps to have access to a car of this school. But the parking permit will cost over $200.

History has given Georgian Court an attractive campus to work with.

Georgian Court was founded as a Sisters of Mercy school, much like Salve Regina University (RI), which I visited over three years ago. Like Salve Regina, Georgian Court is located on the grounds of a former estate. This one was constructed by railroad developer and speculator George Jay Gould at the start of the 20th century. The Goulds had named the property Georgian Court. It was sold to the sisters in 1923 with the stipulation that the name remain Georgian Court.

Gould’s mansion (shown at the top of this post) was formerly the academic and residential center of the school. It is now used for special events, including a Murder Mystery Night for the students. Some of the more interesting features of the estate such as the statue of Apollo, a replica of an original in Versailles, France, Gould’s private lake and polo palace (can’t think of a better name for it) have survived. The polo palace will be renovated to become the university’s student center. When finished it could be one of the largest student centers on any campus in New Jersey.

A new health and science center is in the planning stages, part of an ambitious strategic plan to increase undergraduate enrollment by 270 students.  This year the university sold 42 acres of unused property to a local yeshiva. That will help provide seed capital that will help fund renovations and new construction. 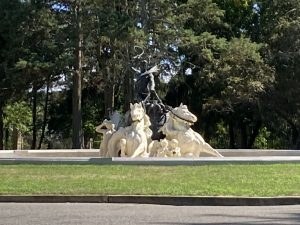 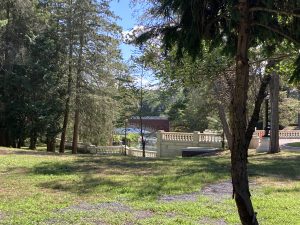 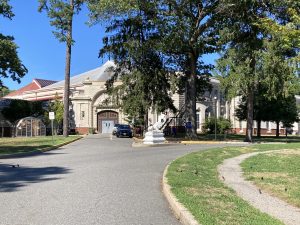 I was told that approximately 500 students live on campus, slightly less than a third of the undergraduate student body. It’s actually possible to get a single room as a junior or senior, if you are making good progress towards your degree. The freshman and sophomore hall was on a 60s-70s design that’s common on many campuses, including Michigan State’s. These halls are also scheduled for renovations. 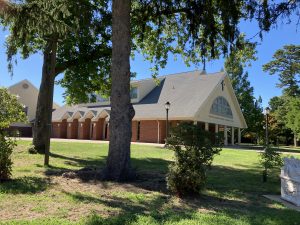 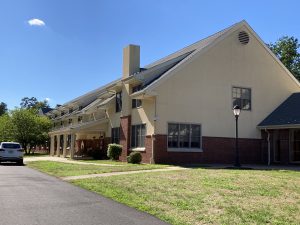 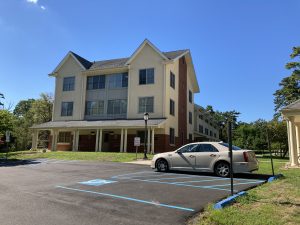 The school had an estimated total cost of attendance of just under $51,000 for the 2021-22 academic year. But it promotes that the annual cost is lower than some of the New Jersey public colleges.  Virtually everyone could get a merit scholarship of at least $8,000/year. The largest award last year was $19,000/year. The larger awards will make Georgian Court the less expensive option. I could not find the GPA requirement to keep these awards from year-to-year. However, I did find that there were supplemental awards that Georgian Court students could earn during their education.

The aid appears to help.

Those who graduated in 2020 and borrowed owed, on average less than $22,000. They would have had to borrow more to go to a public college. However, this school also lost about a quarter of a freshman class, although the most recent four-year graduation rate (47%) is about the same as Montclair State’s or Rowan’s.  It’s only fair to ask the admissions office to tell you why students leave. I rarely find a school that does as much with financial aid to help students to stay.

I felt that Georgian Court can be an affordable alternative to a public college, at least within New Jersey, where public college tuition and fees are much higher than national averages. The programs that are more selective at a New Jersey public college, especially nursing, appear to have more achievable admissions at Georgian Court. However, I also thought that a student would need a car to take advantage of the greater community further from campus. I am curious to see how the university’s strategic plan will make a difference in terms of retention and graduation rates over time.