Getting To Know-Knox College (IL)

I first became acquainted with Knox College at a recent professional conference. This school piqued my interest because it has long operated on principles of affordability and inclusion.

Founded by abolitionists, Knox College has educated women since 1870 and granted a degree to its first Black and international graduate in the same year. This is one school I must watch as I work on my second edition of The Good College. It has many strengths that students and parents will appreciate, and you don’t need to be a 4.0+/1500+ SAT student to take advantage of them.

Rebecca Yarita, Associate Director of Admissions, and I had an engaging conversation–and I hope you will listen now!

The Knox College student body is quite diverse.

Thirty-four percent of Knox students are men and women of color. Nineteen percent come from other countries. While media rankings mean little to me, alumni satisfaction ratings do matter. Knox ranked 45th among colleges of all sizes in Forbes 2019 Grateful Graduate Index. At the end of FY 2019.  However, enrollment has dropped from approximately 1350 to 1150 students since 2017-18.  Knox has retained no less than 81 percent of a freshman class since 2017. With one exception (the Class of 2018), Knox graduated at least 65 percent of each class that entered between 2010 and 2015 within four years. Other outcomes reported by the college are no less impressive.

Knox also plays 21 varsity sports, including football, the same number as the University of Illinois. About a third of Knox students are also athletes. However, the large selection of music and theatre options within the academic programs also showed me that there might be just as many artists as there are athletes.

Knox College has impressive academic options, if you take proper advantage of the academic calendar.

The college runs on three ten-week trimesters, with a long break from Thanksgiving week into mid-January. The long break can be used for internships, shadowing or study abroad. Depending on whether they pursue a BA or BS students typically take three courses per trimester.Ninety-six percent of all classes taught at Knox during 2020-21 had 29 or fewer students. Combined with the trimester calendar, Knox will offer more opportunities to get to know your professors than many other schools, including other private liberal arts colleges.

All students have the opportunity to use a $2,000 Power of Experience grant during their junior or senior year to cover travel. living expenses or equipment for an unpaid learning experience. This is in addition to any other honors, research or internship opportunities offered through the college. Some academic programs offer single-course Immersion Experiences.  Short-term immersions are also available.

Knox offers 42 majors and 57 minors, a large selection for a school this small.

Math and Science majors can choose between either a BA or BS in biochemistry, biology, chemistry, computer science, environmental science, mathematics, neuroscience, psychology, and physics. Qualified sophomores can also apply for Early Admission to the MD at George Washington University School of Medicine. There are also cooperative agreements towards programs in nursing, occupational therapy and optometry.

Knox is also one of the smallest schools I have covered that grants degrees in Elementary and Secondary Education as well as Political Science and Public Policy. Among the minors are five options within Music and Theatre. Knox was also the first US college to host a Peace Corps Preparatory Program. The college also partners with the Indiana University Law Scholars Program at the Maurer School of Law, where scholars receive up to $75,000 in aid and other benefits. Knox also has an interesting JusticeCorps program for aspiring attorneys that is administered by the Illinois Bar Foundation.

Knox is also one of the small colleges that I have covered that offers an optional College Honors Program.

Students who opt for Honors have a 3.3 GPA or higher and complete an independent research project under a faculty sponsor for three to five credits. The end product is a thesis or portfolio, but an Honors student must also take a final exam. The final is oral, and given by the student’s advisory committee, assisted by a scholar from another college or research university who has special knowledge of the student’s field. This is much like a thesis defense in graduate school.

Knox College is not ultra-selective.

This school attracts a B+ or better student who has rigor on their transcript, but might not gain admission to a more selective liberal arts college such as Carleton or Grinnell, or possibly Home State U.  Knox has been test-optional since before the pandemic. The middle 50 percent of the freshmen who entered this fall and submitted test scores scored between 1150 and 1380 on the SAT and between 25 and 30 on the SAT. Those scores might have gotten the same student denied at the University of Illinois.

Knox might have been more affordable than Home State U.

According to College Navigator,  the average freshman scholarship In 2021-21 was close to $37,000 nearly 60 percent of the Knox’s estimated Total Cost of Attendance. Merit-based awards averaged just under $27,000. 2021 graduates who took out loans owed just over $29,000. They might have owed more to attend the University of Illinois, among other flagships. The recently announced Prairie Fire Flagship Match will make Knox even more affordable to more families that want a small college, but have to work within a large public college budget. This program will match in-state charges not only for applicants who hail from states with high resident tuition charges such as Illinois, New Jersey and Pennsylvania; it will also match in-state charges for the lower-priced State University of New York.

Knox College is located in Galesburg, Illinois, a community with ties to Abraham Lincoln and author/journalist poet Carl Sandburg.

Lincoln’s most famous debate with senatorial, then presidential opponent, Stephen Douglass in 1858, took place in Old Main, one of Knox College’s signature building.. Sandburg was born in Galesburg in 1878. He would go on to win Pulitzer Prizes: two for his poetry and his biography of Lincoln. The community was also a site for the Underground Railroad which helped slaves escape to free states before and during the Civil War

Located off Interstate 74, Galesburg is approximately three hours from Chicago and two and a half hours from St. Louis. Downtown Galesburg has amenities close to campus and the college community works hard to build a campus-based social life. The town is also a county seat and there are no other colleges to compete for internships, shadowing and student teaching opportunities.  However, Galesburg has lost many jobs and amenities. A Maytag plant that once employed nearly 5,000 people in Galesburg closed in 2004. Sandburg Mall, a shopping center with over 50 stores, closed four years ago.

Knox’s campus has a second signature building, the Whitcomb Art Center, but a small college like this has to prioritize renovations over new construction. Seymour Library is a good example of a nice renovation shown below.  The college also operates its own field station about 20 miles from campus for environmental studies 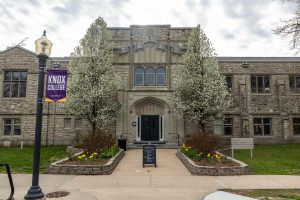 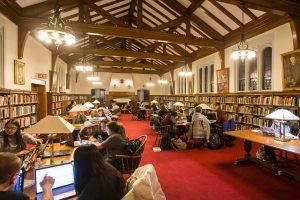 Knox has a large alumni community in the Chicago area.

Over 4,000 alumni registered in LinkedIn.com are based in or near the Windy City. To my surprise, California had the second largest concentration of Knox alumni, more than 600 across the state.

From a virtual distance Knox College appears to be a school that attracts very bright and motivated students who have demonstrated strong potential beyond grades and test scores. It reminded me of two schools, Juniata College (PA), which I have visited twice and Whitman College (WA) which I took a virtual visit. Like Knox, these schools also strive towards affordability and provide strong academic and research supports.  Knox appears to be a school where the students could be themselves and learn to rely on each other for entertainment and friendships within a relatively isolated community.

Listen to my conversation with Rebecca Yarita and learn more about Knox College!