Getting to Know Lehigh University (PA)–Again

Founded in 1865 after the close of the Civil War, Lehigh University opened with a $500,000 donation from Asa Packer, President of the Lehigh Valley Railroad. According to Lehigh’s official history, Packer’s donation was the largest single contribution to an American college up to that time. In 1871 Lehigh made the decision to be tuition free and kept that commitment for two decades.

Today, Lehigh is a very expensive school that plans to add another 1,000 undergraduates as well as another 500 graduate students over the next decade. There’s going to be  lots of construction and renovations  to make room for more students. I have updated my Pinterest page to show you more of the campus.

The academics are the best parts of this school.

Lehigh asks applicants to choose one of the colleges–arts and sciences, business, engineering and health when they apply, even when they are undecided on a major. However, it is easy to change schools and majors if you plan well.

Outside of the College of Health, which is quite new, Lehigh undergraduates are divided nearly equally between the other three undergraduate schools in arts and sciences, business and engineering. However, when I think about the selection of majors and cross-disciplinary programs, the majority of the students will be in business or STEM. This was the first school that I have visited where the admissions office handed out copies of the First Destinations Report to let parents know that the university is quite serious about helping their children find jobs.

Lehigh University has followed through on some original ideas that combine the liberal arts with engineering and business and with business and computer science.There are many majors that you cannot get at a smaller school and it’s easy to double major or take more than one minor.  The options for study abroad run by the university as well as the Iacocca International Internship program are unique reasons to consider Lehigh. So are study-away programs in the US at the United Nations and in Silicon Valley.

Lehigh had a President’s Scholar program where undergrads with excellent academic records could apply for a tuition-free fifth year towards a second major or a masters degree. Sadly, that program was discontinued after 2019. However, Lehigh offers 4+1 programs in Education, Engineering and Population and Public Health. Lehigh students who did not study business in their undergraduate program can also apply to earn the MBA in only one year. However, they are likely to compete against people who are earning undergraduate business degrees for the same jobs.

One thing that I don’t like about Lehigh: gatekeeper courses.

Introductions to Economics, Chemistry, Calculus and Physics, could have over 100 students. Those who need a teacher to inspire them, especially in STEM, might want to consider a smaller school. Liberal arts schools that I have visited that are worthy of consideration vs. Lehigh: Lafayette College (PA), Trinity College (CT) and Union College (NY). Interestingly, these schools do better at graduating students on time than Lehigh. The College of New Jersey  (TCNJ) in my backyard is a public alternative that has about 1,500 more undergrads than Lehigh, and it does just as well as graduating a class. Interestingly, TCNJ has an average class size of 21 students. Lehigh advertises an average class size of 28. TCNJ might be a lower-cost option that gives you no less of an education, but it does not have an alumni base as strong as Lehigh’s

Lehigh has the money to fund its growth

Lehigh’s endowment in FY 2021 was approximately $1.8 billion, larger than many public university systems that have much larger graduate and professional schools. One reason is a very high alumni giving rate. Over 70 percent of Lehigh undergraduate alumni have made a gift to the university at some time. The university states that If just a quarter of all alumni who made a gift in the past five years were to contribute every year, Lehigh’s participation rate would jump immediately to over 40 percent. The national average is eight percent.

Alumni are well recognized on the Lehigh campus. As soon as you leave the admissions building you will see this statue of Asa Packer and names of prominent alumni on the benches. Look closely at the bench in the photo below and you will see the names James Ward Packard and Roger Penske. Packard went on to found the Packard Motor Car Company. If you can visit the Packard Labs on campus, you will see the very first Packard car built in 1899. Penske was a very successful race driver who later become a billionaire. 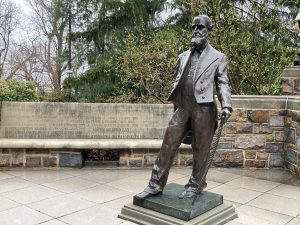 Lehigh has a very nice campus.

It is subdivided into the Packer Campus, the academic and residential center of the university, Mountaintop, a growing academic center, and Goodman, the athletic center.  Walk the main lawn  of the Packer campus and you’ll feel that you got into a very selective college with a proud history. The university recently opened three new residence halls on the Packer Campus and plans to open three more. However, you are going to climb up and down a mountain to get to some classes or sports events and practices, unless you want to rely on buses. Lehigh’s campus is 1,600 acres, more than twice the size of Cornell’s, a school that is no less hilly.

If you are looking for a big city or college town, Bethlehem is neither.

The Christmas City has Steel Stacks, a concert venue, as well as a historic downtown that hosts a major Christmas festival as well as a ten-day music festival. However, the social life will be more campus based, though Lehigh has the brand recognition and proximity to major cities to attract noted entertainers and speakers. Greek social life attracts a quarter of the men and over a third of the women. In addition, Lehigh is a male-majority school,  rare among colleges these days. Patriot League rival Bucknell, for example, has become a female-majority school. Lewisburg, home to Bucknell, looks more like a college town than Bethlehem to me, though Bucknell’s location is far more isolated.

Athletics are somewhat important at Lehigh. The Lehigh-Lafayette football rivalry is the oldest in college football. The university competes in 23 D-1 scholarship sports, more than Temple or the University of Pittsburgh. This is also the tenth anniversary of Lehigh’s NCAA Men’s Basketball win over Duke, a historic win by a 15 seed over a 2 seed. Their star,  CJ McCollum, is probably Lehigh’s most prominent athletic alumnus. He’s now in his tenth season in the NBA after graduating with his Journalism degree. The baseball and wrestling programs have also been quite successful.

The average need-based scholarship is well over $40,000. But the average merit award, however, is less than $8,500. While the majority of the class of 2020 did not need to take out loans, 12 percent of the class had to borrow from private sources, owing, on average, over $57,000.

I have never had to reconsider what I wrote about a school before, but I have to do it with Lehigh University.

Lehigh gets shopped vs.larger schools, including state universities, Ivies and near Ivy/Ivy-like institutions. However, it does not have a law school or a medical school as most of those schools do and the pre-professional options exceed those in the liberal arts. Some might look at Lehigh vs. Cornell or Dartmouth, especially if they like the ideas of Greek life and STEM. But Cornell has more the double the undergraduate population and Dartmouth does not offer an undergraduate business program.

However, when I look at the majors list, the school’s location, and the popularity of Greek life at Lehigh, I feel that Lehigh is more similar to Rensselaer Polytechnic Institute (RPI), Worcester Polytechnic Institute (WPI) and Stevens Institute of Technology, though it has a larger selection of business and liberal arts majors, plays D-1 in all varsity sports and has a much larger endowment. WPI does better than any of these schools when it comes to graduating a class in four years. Lehigh does better than RPI or Stevens.

Why do I consider RPI, WPI and Stevens to be more similar schools?

Like Lehigh, they were founded by wealthy 19th century industrialists who had their own ideas about how students should be educated about science and technology. More recently, these schools built up AASCB accredited business programs. They are still heavily recruited places for STEM graduates, though I believe that Lehigh is equally recruited for business. Each school was founded in a place where graduates were likely to work after they earned their degrees. To some extent this is still true. The largest alumni groups don’t remain near campus, but they really don’t venture far.

Lehigh alumni are much like RPI’s. Fifteen percent have stayed around the Allentown-Bethlehem-Easton area, Twenty-three percent are clustered around New York City and eleven percent around Philadelphia. The Lehigh campus is about an hour and a half from the centers of both cities.

Lehigh is more selective  than public options such as Rutgers, Penn State or The College of New Jersey. The sweet spot to get in is probably a 3.9 with a 1350 SAT/29 ACT and demonstrated interest is Important. The education is quite rigorous, but you can get lots of help.  The career development support is excellent in the undergraduate schools. But you have to like the location and accept the importance of athletics and Greek life in a very campus-based college community, unless you have access to a car.

I recommend a visit before you apply and after you get in. This is not a true alternative to an Ivy or near-Ivy/Ivy-like school that’s located in a big city.  But you might consider Lehigh a target school if you are reaching for Cornell or Dartmouth.