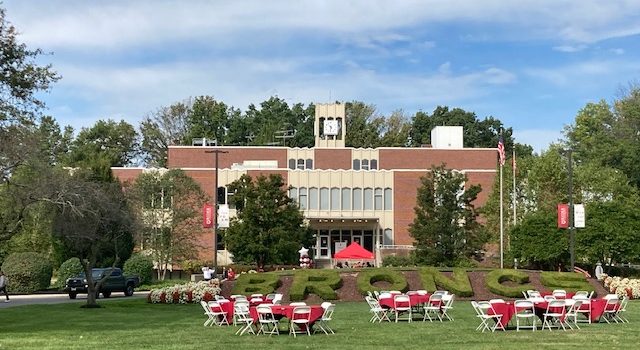 Getting To Know: Rider University (NJ)-Again

After returning home from Boston I attended an Open House at Rider University, which is about 10 minutes from where I live. A popular option for many students in Central and Southern New Jersey, Rider attracted over 1,500 prospective students and their families to a fall Saturday open house. I learned that I definitely needed to write an update.

Rider University is not exceptionally selective.

Eighty-two percent of applicants for the Class of 2025 were accepted. The middle 50 percent had SAT scores between 1050 and 1270 or ACT Composite scores of 28 and 31. Average GPA is a 3.4. One concern: the university lost just over a fifth (22 percent) of that incoming class, according to the latest data I could find on US News College Compass.

Rider went test-optional well before the pandemic and scores are only Considered if submitted. The greater consideration is: how large a merit scholarship can you get?

Only the full-tuition Trustee Scholarship requires a separate application. However, if you apply test-optional with a 3.75+ GPA, and like what you see at Rider, it’s worth the extra effort to try for the award. Two of the smaller awards, the Presidential and Provost Scholarship should get your first-year cost of attendance close to the in-state costs for a New Jersey public college.  However, each award is tied to GPA, and the smaller awards are easier to keep.

Rider does not make data on student indebtedness available to the public. Nor does it publish a four-year graduation rate. In priors years Rider has graduated just over half of its freshmen classes on time.

The Cranberry Investment has a big promise.

The Cranberry Investment is an assurance than a student should be in a position to become employed full-time or admitted to graduate school within six months after earning a degree. Otherwise, the university will provide career coaching and/or recommend either nine additional credits of undergraduate major coursework at no cost or a paid six-month internship. However, a graduate must have earned a 2.75+ overall GPA to qualify.

The president of the university did an excellent job of selling the Cranberry Investment to prospective freshmen and their parents during the Open House. However, the minimum GPA did not come up when he spoke. I hope that the university continually reminds students about the minimum GPA requirement. Not everyone graduates with a 2.75+ GPA.

Founded in 1865, Rider University has been at its current location since 1959.

You will not find ivy-covered buildings as you might see at a school with a longer history such as Rutgers-New Brunswick.  Campus buildings (dining hall and a residence hall shown below) can best be described as functional though I noticed many renovations since my last visit. Rider’s campus can be navigated in a manner of minutes. It is also an easy campus to secure.  Fraternity and sorority houses, apartments, parking lots and athletic fields are at the edges of campus. 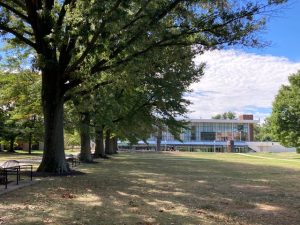 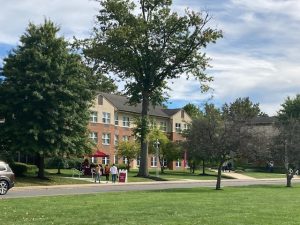 The university recently renamed its business school after Norman Brodsky, a serial entrepreneur and a columnist and senior contributing editor to Inc. magazine.

This is a major coup. A Rider alum, Brodsky not only raised the university’s profile; he also endowed a four-year full-tuition scholarship to the winner of an annual high school business competition. No other school in New Jersey, New York  or Philadelphia offers an opportunity to win a similar award. To me, the business school is a signature building because of the number of business programs offered at the university. I dropped two photos of the lobby below. 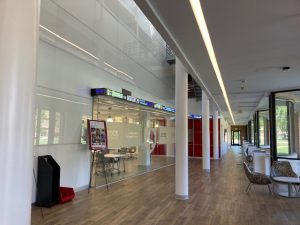 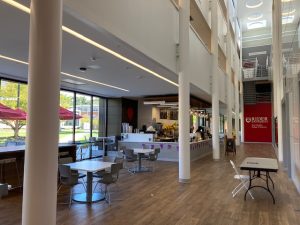 That’s more than you will find at some larger schools, including Rutgers-New Brunswick. Rider students can receive up to nine credits for paid internship experience, as long as they pay for the credits. However, the university also offers a tuition discount if those credits are earned during a summer session or a January Term.  I have never seen a college do that. If you have some inkling that you want to study business, check off Brodsky when you apply, so you can take the Introduction to Business class. It’s open only to freshmen.

Aside from the business programs, Rider offers an interesting mix of liberal arts, education, communications and STEM majors.

Rider has more majors outside of business than one might expect for a school with fewer than 4,000 undergrads. If you are shopping Rider against a much larger school like Rutgers, you might want to search all programs. I was amazed how many options were available in communications alone as well as the selection of conservatory based music programs. Rider also has one of the largest undergraduate and graduate teacher education programs in New Jersey as well as a Post Bacc. program for those who did not study education in college.

Rider University’s location is a strength.

Lawrenceville and it’s neighboring township, Ewing, are home to more than 10,000 college undergrads at Rider as well as The College of New Jersey. .But Rider is not within easy walking distance to shopping or eating places off campus. Downtown Lawrenceville has some nice places to grab lunch or dessert, but they are pricy for college students.. The university helps by providing shuttle bus services to  Princeton Market Fair Mall as well as to train service to New York City. But if you do not bring a car to Rider, it is a good idea to befriend someone who has one.

Access to internships and student teaching is easy-if you have a car.

Rider University is right off Interstate 295 which is a direct connection to businesses on State Highway One as well as into nearby Bucks County, Philadelphia and Trenton, the New Jersey’s capital city. Students can also get to trains serving New York and Philadelphia in 10 to 15 minutes. Freshmen must pay $300 to park their car on campus, but sophomores, juniors and seniors pay nothing. Rider is one of the most auto-friendly campuses that I have visited.

Rider competes in 21 NCAA Division I (scholarship) sports with some high-profile successes. Jason Thompson, a 2008 graduate, was the 12th player chosen in the 2008 NBA Draft by the Sacramento Kings. He went on to play nine seasons in the NBA before finishing his career overseas. Stella Johnson, a 2020 grad, is the university’s all-time leading scorer in women’s basketball. A two-time conference player of the year in 2018 and 2019, she has recently played for the WNBA’s Washington Mystics. The men’s and women’s swimming program as well as the men’s wrestling program have enjoyed long-term success. Rider brought out the Bronc for the open house and invited visitors, especially accepted students, to pose for pictures.. 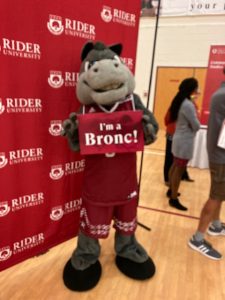 Rider is a good school for a B/B+ student interested in business, communications, education or the performing arts who wants to work in New Jersey, New York City or Philadelphia. However, it really helps to enter knowing what you want to study so you can keep the GPA respectable. Few schools work this hard at awarding merit aid, but those who take it must be prepared to work to keep it.

Learn more about me at ‘Tests and the Rest’ with Amy Seeley and Mike Bergin !