Much has changed since my last visit to Saint Joseph’s University, a fine Jesuit school in Philadelphia. I had first-hand opportunity to learn more through an in-person re-visit I attended as part of a professional conference. I have always liked Saint Joseph’s for programs in business and education as well as its campus setting.

It’s not tough to get in to Saint Joseph’s. Overall, 80 percent of applicants for the Class of 2024 were accepted. The university has been test optional for several years, though the McNulty Scholars, women in STEM on full or partial tuition scholarships, will have scores commonly seen from students at more selective schools.

There’s a lot to like about Saint Joseph’s University.

Saint Joseph’s University attracts the very good (B+/1100 to 1290 SAT) student who is usually considering another Jesuit or Catholic school or a state university such as Rutgers, Penn State, Temple or UDel. Those who can qualify for one of the University’s larger merit scholarships will find tuition and fees to be competitive, even with the out-of-state charges of the public universities.

It also helps if you have or are willing to discuss your religious identity; all students must take 12 credits in Theology and Philosophy, regardless of their major. One is a required course in Catholicism from the Jesuit viewpoint. While this school welcomes students of all faiths, it’s between 75 and 80 percent Catholic.

With a 75 percent four-year graduation rate as well as an 89 percent freshman retention rate, Saint Joseph’s University has been a very good school for the very good student.

Saint Joseph’s University is well located within Philadelphia. It’s very easy to get to SEPTA trains into Center City for internships, part-time work or just plain fun. The campus is also quite close to some of the nicer parks in the city. Parking appears to be less of a problem here than at other urban campuses I have visited because of a large deck near the Hagan Gym. The main campus is really in two communities: Philadelphia and Lower Merion. The latter is where NBA legend Kobe Bryant went to high school before going pro with the Los Angeles Lakers.

Hawk Hill’ has an expensive look and feel, much like Georgetown or Villanova. I’ve provided a link to my Saint Joseph’s Pinterest page to share more.. The only space that felt like a let-down during this visit and my previous one was the dining hall. It resembled a high school cafeteria more than many college dining spaces. In addition, the off-campus housing is quite expensive. 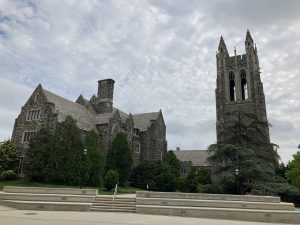 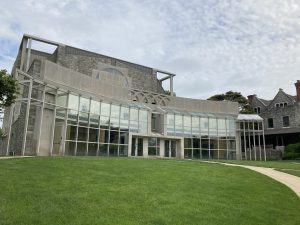 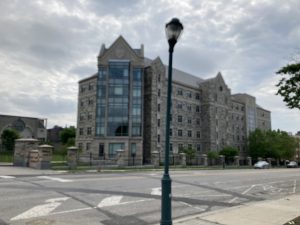 Just over half of the undergraduates live on campus. Only five percent of the men are members of Greek social fraternities, but sororities attract a quarter of the women. Interestingly, the suite-style options are in older halls versus traditional corridor-style options. I watched YouTubes of the residential living options and thought that McShain was the most interesting, partly because it was connected to a bridge that went over City Avenue, a busy road that splits the campus. A second bridge to cross the avenue will be under construction during the upcoming academic year.

Basketball is the sport that captures the most attention around the cry: ‘The Hawk Will Never Die’. The Hawk mascot travels to every game, home and away, and is on full scholarship.

Saint Joseph’s has not produced a basketball player at Kobe Bryant’s level. But Hall of Fame and NBA championship coach Jack Ramsey is an alum. Ramsey began his coaching career at Saint Joseph’s going 234-72 over 11 seasons, leading the Hawks to five Big Five championships. He would later coach the Portland Trail Blazers to the NBA title in 1977. Phil Martelli, now the top assistant at the University of Michigan, led the Hawks into the Elite Eight.

Saint Joseph’s other prominent athletic alum is former major league pitcher Jamie Moyer. He pitched in the majors for 25 seasons, winning 269 games, including 20 in 2001 for the Seattle Mariners. Moyer earned a World Series ring in 2008 with the Philadelphia Phillies and won his last major league game at age 49.

The university formalized a merger with the University of the Sciences (USciences) also located in Philadelphia.

Saint Joseph’s University will now have more offerings in the health professions than any Jesuit school in America, including Georgetown.  Enrollment rises from 4,200 to over 6,000 undergraduates. The university will now offer programs that lead towards advanced degrees to become a Physician’s Assistant, Physical Therapist, Occupational Therapist and Pharmacist.

Saint Joseph’s will also offer programs in Medical Laboratory Science and Neuroscience as well as a doctoral program in Cancer Biology. Saint Joseph’s already offers unique program in Autism Behavioral Studies and Interdisciplinary Health Studies. The university has a center for autism research as well as a residence hall for autistic students.

So far, one cultural difference has arisen from the merger.

Saint Joseph’s does not dispense nor write prescriptions for birth control on Hawk Hill. This is partly because the university does  not operate a pharmacy, partly because of Catholic doctrine. However, USciences, which originated from the Philadelphia College of Pharmacy, the oldest pharmacy school in the US, distributed birth control through its health centers. The controversy was amply described in the Philadelphia Inquirer by a nurse who formerly worked in the USciences health center.

This will be a merger between two very different schools.

It will not affect incoming first-year students or continuing students at either institution in terms of academics, costs or financial aid, except possibly athletes at USciences who have been on D-2 scholarships. They will now be students at a school that competes at the D-1 level.

However, the undergraduate admissions team will recruit prospective freshmen for the health professionals who would be more likely to study under a Saint Joseph’s curriculum. That positions the school differently vs a school such as Drexel or Thomas Jefferson that has no religious affiliation. On the other hand, Saint Joseph’s will offer academic and pre-professional programs that religiously affiliated schools like LaSalle and Villanova do not.

Being a Jesuit university, Saint Joseph’s has required liberal arts, religion and philosophy courses. However, the university makes it easy for students to “double dip” to apply general education courses towards a second major or minor. Sixty-five percent of Saint Joseph’s students graduate with either a second major or minor. This has worked well outside of the health professions, which have too many requirements to allow for double majors or minors.

USciences has had liberal arts requirements, but no requirements in religion or philosophy. It would be interesting to see Saint Joseph’s add courses in medical ethics to complement the majors in the health professions.

While none of these comparable schools are Jesuit institutions they are affiliated with the Catholic faith, have an average of over 6,000 undergraduates and are well invested in the health professions. Like Saint Joseph’s, Sacred Heart and Seton Hall have their health related programs away from the main campus. Saint Joseph’s has a totally urban setting. The other two schools have a more suburban setting. However, Seton Hall’s health professions complex is a longer schlepp from the main campus.

When it comes to the more competitive health programs, Saint Joseph’s is well positioned. This is due to its proximity to many medical centers in Philadelphia as well as firms such as Merck, Johnson & Johnson and GSK. The USciences campus is located in University City near Penn and Drexel, though it is not, in my view, an attractive urban setting. There will be shuttles between campuses. But future students have to hope that a plan will arise to improve the appearance and perception of safety on the USciences campus.

Saint Joseph’s University has really stood out for business education.

The Haub School of Business offers two majors that you won’t find at many other schools: Food Marketing and Pharmaceutical Marketing. There are also  programs in Actuarial Science, Business Analytics and Sports Marketing as well as a minor in Advertising.

Like it’s neighbors, Drexel and Temple, Saint Joseph’s offers co-op for business students. The difference is that students do two co-ops. One is in the fall of the sophomore year. the second in the spring of the junior year. The summer after freshman year is devoted to classes to get in three semesters of work before the first co-op. You can earn the degree in four years with both co-ops versus five years at Drexel.  There are also 4+! options to earn a bachelors and a masters degree in business subjects as well as education, public policy, writing and some of the STEM fields 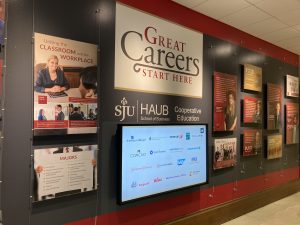 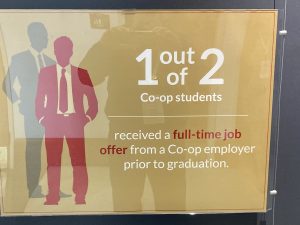 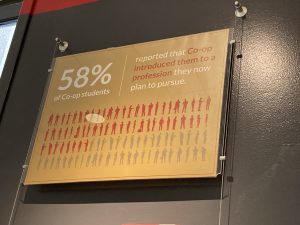 But Saint Joseph’s University is still a very regional school.

The alumni base is also heavily weighted towards the Philadelphia area as well as the Mid-Atlantic region. If you’re west of Pennsylvania  or south of Washington D.C, the network is not as strong as it might be for a school such as Boston College, Fordham or Georgetown.  There’s over 31,000 Philadelphia area alumni registered in Linkedin.com. There’s also a sizable contingent of over 6,200 in the New York Metro Area.

Saint Joseph’s University has been a very good school for the students it has attracted to Hawk Hill. But it is about to become a different school as it advances education in the health professions. It’s too early to know how the student community will continue to react, or possibly change, after the merger.