Getting to Know: UC Riverside

The University of California system is world renown . But UC Riverside might be the system’s more recent success story. I wanted to learn more. I also collected a few photos on Pinterest for you.

Founded on the grounds of a citrus experiment station, UC Riverside opened its doors to 127 students in 1954. Today, UC Riverside has nearly 23,000 undergraduates, up from 18,500 since 2012. While UC Riverside is not the most selective campus, in the system–about two-thirds of applicants got in– it does quite well with the students it attracts and retains. UC Riverside’s four-year graduation rate rose from 44 percent for the Class of 2012 to 65 percent for the Class of 2021. Freshman retention cracked 90 percent beginning with the Class of 2018. It’s slipped a little recently to 88 percent in 2021, but will likely rise again, as pandemic concerns subside.

UC Riverside is one of four Hispanic Serving Institutions in the University of California system. UC-Santa Barbara, UC-Merced and UC Santa Cruz are the others. Nearly 40 percent of UC Riverside undergrads identify as Hispanic or Latino and over 30 percent are Asian. The university has topped Washington Monthly and US News Best Colleges rankings for social mobility. UC Riverside has also earned several other high rankings.

UC Riverside is also a more residential university community than I first thought. Over a third of the undergraduate student body lives on campus. That’s about the same as many other large public universities. Dining and recreational facilities (photos below) look quite nice from a virtual distance. Outdoor dining is especially nice, given that there are 275 days of sunshine in California’s Inland Empire. Umbrellas are nicer, given that it can extremely hot at times 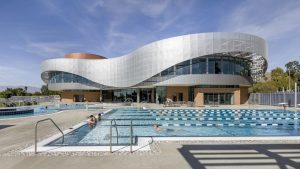 The university plans to add 7,500 beds to raise the on-campus presence to 40 percent. Seven buildings on campus were completed during the pandemic including two first-year residence halls, an upper-class apartment complex, a multi-disciplinary research center, a dining hall and the student success center with modernize lecture spaces (photos below). 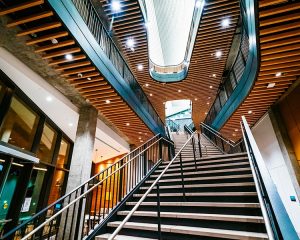 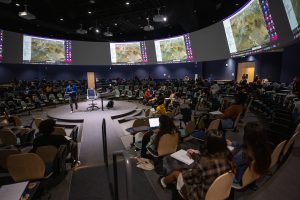 Ashley Swengler handles international and out of state admissions for UC-Riverside. Listen to our chat now!

Ashley’s role is important, in part because UC Riverside is the only school in the UC system that offers non-resident scholarships. The scholarship is worth $13,500/year for qualified applicants who have a 3.9+ GPA.. That will reduce non-resident tuition and fees to just over $30,000. This scholarship makes UC Riverside cost competitive for a New Jersey resident vs. Penn State, the University of Maryland-College Park or UDel. Smaller scholarships are also available. However, you also need to consider air fare if you’re coming to school from the East Coast.

At the moment Californians make up the overwhelming majority of the undergraduate student body. Only seven percent come from other US states and only countries, so there’s a desire to grow the non-resident population over time. However, 30 percent of the freshmen commute, high for a flagship state university that can probably accommodate anyone who asks for on-campus housing. Those who needed to borrow, mostly Californians, owed, on average, less than $20,000. The maximum that they could have borrowed through the Federal Student Loan Program was $27,000.

Brand recognition vs. UCLA or UC-Berkeley is an issue

Those schools are helped by history as well as athletic traditions. UC-Riverside has not played football since 1975. In addition, D-1 sports were on the chopping block at the onset of the pandemic, before vaccine were available and while students were not on campus. There’s over 57,000 Los Angeles area alumni registered in LinkedIn.com as well as over 10,000 in the San Francisco Bay area, both sizable communities that could keep in touch with their alma mater. But there is not as much to bond them after graduation as there is at a school that has a high profile sports program.

UC Riverside has academic strengths-just like any other UC campus

Like UC-Berkeley and UCLA, UC Riverside has Noble Prize winners on the faculty and has strengths in STEM and the social sciences. But UC-Riverside also has an undergraduate business school, a strength shared only with UC-Berkeley and UC-Irvine. It’s the only UC campus that offers an undergraduate degrees in creative writing and public policy. The Thomas Haider program offers assured admissions to UC Riverside’s medical school for up to 24 UC Riverside juniors from California. No other UC campus offers a similar opportunity.

UC Riverside has over 150 majors. Psychology, Business, Biological Sciences and Biological Chemistry, Computer Science and Mechanical Engineering are among the most popular . And, unlike other UC campuses, no majors are impacted, though it could be tough to switch into business or engineering.

But there are some weaknesses

There’s also no direct admission into the business school, as there is at many flagships like Penn State-University Park, but that may be a good thing for students undecided between business and the liberal arts.  The honors program is small, with only 800 students. By comparison, UDel has 2,000 students in their Honors College at a university with 4,000 fewer students than UC Riverside.

.UC campuses are known for large classes. But this is a more serious issue at Riverside. Thirty-four percent of all classes at UC Riverside had over 50 students while 17 percent had over 100. Student-faculty ratios mean little at larger schools, but UC Riverside’s is 24 to 1. That’s more similar to a regional public university that grants fewer graduate degrees (and therefore has fewer teaching assistants) than a school like UCLA, whose ratio is 18 to 1. This means that UC Riverside is more likely to have fewer sections of introductory courses, larger junior-senior courses and fewer electives in the majors.

The Fall quarter starts during the third week in September and ends about two weeks before Christmas. Winter quarter starts about a week after New Year’s Day and ends in late March. There’s about a two week break until the Spring quarter, which ends in mid-June.

Work goes faster in a quarter system than it does at a school that runs on semesters, though you can take more classes during an academic year. However, if you live on campus, but must fly home during breaks:

If you’re applying to other UC campuses the quarter system is used at seven of them. UC Berkeley and UC Merced run on semester calendars,

Which schools would be most similar to UC-Riverside?

Given the size and diversity of the undergraduate student body as well as the academics I thought that UC Riverside was most similar to SUNY-University at Buffalo and Temple University. These schools also strive for diversity, student success and affordability, though they offer more majors to choose from. Like UC Riverside, Greek life is not overly popular at these comparable schools. Like SUNY-Buffalo, UC Riverside is on the outskirts of a city vs. being within a city like Philadelphia, home to Temple.  But, as I experienced visiting Temple, UC Riverside students reported on review sites that they needed to get through some sketchy areas to get from UC Riverside campus to the downtown.

SUNY Buffalo and Temple accept around 60 percent of applicants and both are test optional. Both schools have recently graduated 60 percent of their freshman classes. Riverside students enter with a higher average GPA, just under 3.9.  UC Riverside is test free for US applicants, which means that you get in on the strengths of your academics and your answers to the Personal Insight Questions. In 2019, the last year UC Riverside considered scores, the middle 50 percent of the freshmen scored between 1130 and 1330 on the SAT. That’s about the same as SUNY Buffalo or Temple.

Visually, I thought that UC Riverside was most similar to Binghampton University in Central New York. Both campuses expanded around the same times and have a similar layout with an outdoor spaces for events at the center and a nature preserve for respites and academic study. One thing I have noticed is that architects who designed buildings on the UC Riverside campus do a better job of using color and creating an open air feeling compared to SUNY schools. However, Binghamton gets quite cold in the winter while Riverside is quite hot in a desert. There’s also a similar vibe when it comes to athletics. Both schools are low profile but D-1 in sports though neither plays football.

I cannot help but respect UC Riverside for its ambitions, successes at affordability and student achievement and its connections to Southern California. This is the type of school that cost-conscious California parents and politicians like to see, even if their children have been more likely to go to one of the more selective UC campuses. I also happen to like the campus layout as I saw it through virtual tours. However, it lacks the history as well as the resources of the older UCs: Berkeley, Davis and UCLA.

UC Riverside appears to be a school where you will bond around the friendships you make in college, a calendar of outdoor musical and multi-cultural events, including weekly “Nooners,”  and your extracurricular activities. If you are more sold on social and cultural traditions, or starting traditions of your own, and you want some California sunshine in your college education, you might like UC Riverside.

Listen to my chat with Ashley Swengler now!