Getting to Know: University of Connecticut (UConn)–Again

Since I prepare to present my Public Ivy list at this time each year I felt that it was time to do an update about the University of Connecticut , aka ‘UConn’. I attended a counselor’s briefing, listened to the UConn program on The College Tour, viewed several other YouTubes, took a data dive into this school, and updated my UConn Pinterest page.

The university missed only because of their estimated costs. Direct charges (tuition and fees, room and board) were higher than most Ivy/Ivy-like schools charge for tuition and fees alone. Non-resident direct charges will come close to $59,000 for the coming academic year. Resident charges will be just over $36,000. UConn includes mandatory health insurance on those pages. Families that cover their own insurance will pay $2,900 less.

About a fifth of the freshmen in the Class of 2025 received merit scholarships averaging just under $12,000 to ease their financial pain. Those who graduated in 2021 who took out loans to cover educational costs borrowed just over $27,000. That’s the most that they could have borrowed over four years through the Direct Student Loan programs run by the US Department of Education.

UConn is a top performer among flagship state universities.

Most recently, I learned that UConn’s honors college welcomes 550 freshmen each year. That’s more than Penn State-University Park, a much larger school, welcomes into their Schreyer Honors College. There are also 18  living-learning communities, some academic, others based around personal passions and interests.

UConn advertises a student-faculty ratio of 16 to 1, low for a state university. Fifteen percent of classes taught in 2020-21 had over 50 students; seven percent had over 100. These numbers are not far from Cornell (16 percent and five percent), which has a smaller undergraduate student body, and similar to the University of Michigan, a larger, but more resourced, school.

UConn has achievable admissions for an excellent student.

While the university offers ultra-selective special programs leading from freshman year to degrees in dentistry, law and medicine with single-digit acceptance rates, just over half  (56 percent) of the students who applied for the Class of 2025 were accepted.  Admissions are test-optional, but test scores are considered Very Important for those who submit. Less than half of the accepted students submitted either SAT or ACT scores. The middle 50 percent scored between 1230 and 1430 on the SAT and between 27 and 33 on the ACT Composite.

UConn does an excellent job with exploratory studies for a large university. But the university also has direct admission into programs in business, engineering and nursing. If you have an inking towards applying to any of these programs it’s best to try to go direct admission. The university holds Connecticut residents and non-residents to similar standards, even for the special programs.

This campus grew on me when I visited.

The greatest changes are not on campus as much as they are in the downtown across the road. This is the second mixed use campus town (retail, dining and housing) I have seen built from the ground up. The other is next to the College of New Jersey. Most of the “new” downtown in Storrs was under construction when I visited. I have also stayed at the hotel on campus. There are few other options nearby. Book a reservation for graduation on the first day of freshman classes, if you can.

UConn has more than twice the acreage of the University of Maryland-College Park or The Ohio State University, yet it feels a lot less crowded on campus. You can walk from one end to the other in about a half hour. Imagine taking a walk from The Dairy Bar for ice cream to Gampel Pavilion, the on-campus indoor sports venue after you have had your bowl of Husky Tracks. You’ll burn up calories on your way to stop to pat Jonathan, the Husky mascot statue before you get to the door to watch a basketball game. 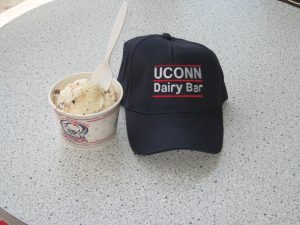 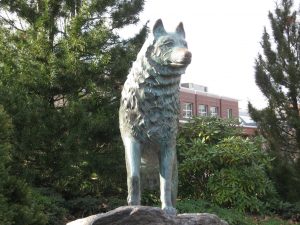 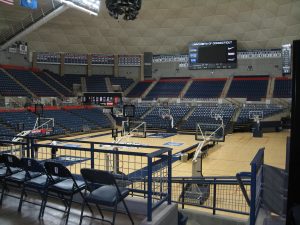 UConn is also unique in that it can house most of its students. An amazing 57 percent live on campus, and there are apartment-style options downtown. Most flagships house closer to 40 percent of their undergrads; some like UC-Berkeley or Michigan house even less. Greek social life is not overly popular here, attracting ten percent of the men and less than 15 percent of the women. Interesting to me: UConn provides fraternity and sorority housing in its own neighborhood called Husky Village.

The housing situation as well as the driving time and distance to Hartford, the nearest city, means that the social life will be more campus based than it might be at a school like Maryland, Ohio State or Rutgers. In addition to sports, UConn, like larger schools, has its own campus-wide dance marathon as well as other bonding events.

UConn is very much a sports school.

With no major league professional teams in the state, aside from a WNBA women’s basketball team that plays during the summer, the Huskies are Connecticut’s Team.  Watch parties are very easy to organize when the teams are so successful. The women’s team, in my view, has the higher profile because some of their greatest players, Diana Taurasi, Tina Charles, Maya Moore and Brianna Stewart are still active professionals, and Geno Auriemma, the head coach, is unafraid to speak his mind. 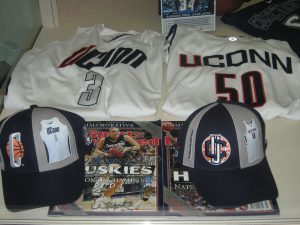 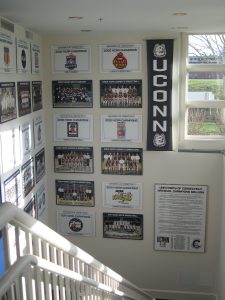 Football has had its recent failures, winning only one game in 2021. The football Huskies play in Hartford, about 40 minutes from campus. Their stadium is located on a site that was originally intended for the New England Patriots, who opted to remain in Massachusetts.  UConn recently withdrew from the American Athletic Conference to become independent in football and joined the Big East for all other sports. The school became the only public university in the conference.

UConn has 24 varsity scholarship teams. The Huskies had success in baseball at the beginning of the 2010s. George Springer, a World Series MVP with the Houston Astros, now with the Toronto Blue Jays, is the most notable baseball alumnus. His former teammate, Matt Barnes, is a reliever for the Boston Red Sox. UConn has also had successes in men’s and women’s soccer and field hockey.

The campus is somewhat isolated, but it is surrounded by major job markets.

There are also nearly 48,000 Husky alumni in the New York area registered in LinkedIn.com as well as over 16,000 in and around Boston. Graduates should not worry about finding networks in many other cities as well as the state of Connecticut. There are over 2,000 Huskies in Los Angeles, Philadelphia, San Francisco and Washington DC.

I would not be surprised if UConn makes my Public Ivy list next year. However, it is more expensive for non-residents than several other state schools that I have visited or reviewed from a virtual lens. It’s tough for me to fault the university, although there are other schools that are more accessible to a large city for off-campus entertainment.

If I was a high school senior from Connecticut who wanted the Big University Experience, I would not hesitate to go to UConn, unless I wanted to go to an out-of-state school that had a better football team. IF I was from elsewhere I would like the school, but the costs would need to work out.

Listen to my latest interview on ‘Tests and the Rest’ with Amy Seeley and Mike Bergin!