Getting to Know: University of Lynchburg (VA)

The University of Lynchburg recently got on my radar due to an article in Inside Higher Education. That article, which you should read, covers the refreshed campus visit experience.

One of the long-standing Colleges That Change Lives (CTCL), the University of Lynchburg has approximately 1,600 undergrads. This is a very nice campus in the Blue Ridge Mountains that has the architecture that I’ve gotten used to seeing at Virginia colleges, regardless of their age. The University of Lynchburg was founded in 1903, but parts of this campus follow the Georgian theme from the late 18th and early 19th centuries. Hopwood Hall (below) is probably the signature building, but the school blends modern elements in buildings and grounds, like the LOVE sign, with the older elements quite well. 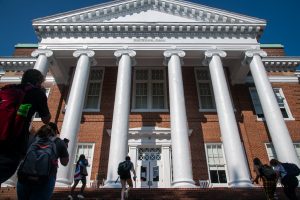 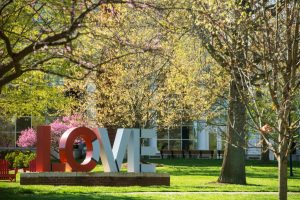 Aaron Basko, Lynchburg’s Associate VP for Enrollment Management and I had a nice chat. Listen in now!

CTCL schools for the most part are liberal arts colleges. The majority are not exceptionally selective, Lynchburg included. CTCL schools try to offer experiences that are likely to be found at more selective, better resourced schools.  The University of Lynchburg went a little further, adopting a theme: Bigger opportunities are born in small classes. Only three percent of all classes taught in 2020-21 had more than 29 students. The social life is more likely to be campus based, though Greek life is not overly popular, attracting 12 percent of the men and women.

The University of Lynchburg stands out by offering:

It is not hard to get into the University of Lynchburg.

The average GPA for enrolled students who entered in 2021 was a 3.5. That’s up from a 3.2 reported in the last edition of The Colleges That Change Lives written in 2013. While admissions are test optional, the Honors College had a minimum SAT score (1300) for admissions, though the Pathway programs did not. Test scores are Considered for admission according to the school’s latest Common Data Set. However, they might help in admissions to Pathways programs that have a limited number of seats for freshmen.

During the 2021 admissions cycle, Lynchburg had a very high acceptance rate.  Ninety-seven percent of all applicants got in. However, entering classes had shrunk from 527 in 2015 to 351 for 2021. Total enrollment stayed about the same as the graduate programs grew in popularity and size. The university practices rolling admissions, making decisions not long after all application materials are submitted.

The new campus visit program helped raise the size of the entering class to 421 for the coming academic year. The program came in time. The university lost about a quarter of the freshman class that arrived in 2021. The most recent four-year grad rate was 58 percent for the class that entered in 2015. However, I do not know how many students continued on to an advanced degree.

The University of Lynchburg is striving towards affordability.

Tuition and fees for 2022-23 will be $34,500 while room and board will be just over $13,000 for a first-year student. But merit scholarships may reduce these charges by $15,000 to $21,000. The direct charges are quite reasonable for a private liberal arts college. The awards make the school price competitive with Virginia’s state colleges, though merit awards at a school such as Christopher Newport, Longwood or Mary Washington might make those schools less expensive for a Virginian.  At present, they make up nearly three quarters of the student body. However, the awards make the costs quite reasonable for a non resident who really wants a small college. A New Jersey resident would pay less to come here than she would to go to Neighboring Flagship State U in Delaware, Maryland or Pennsylvania.Awards helped keep the average indebtedness of students who borrowed to just over $27,000. That’s the maximum a student may borrow through the Federal Student Loan Program.

The University of Lynchburg is an attractive option for ‘outdoorsy’ students.

There are more opportunities for outdoor recreation than most students would have time to do over four years. If you like the school, consider taking part in the Outdoor Leadership Programs.  It’s rare to get instruction in these adventures for nearly nothing, and the life skills stay with you long after college.

Athletics are more important here than at most other small colleges. The University of Lynchburg competes in 21 NCAA D-III varsity sports. This school is a conference power in several sports including baseball, cross country, equestrian, field hockey lacrosse, soccer and track and field. However, unlike conference rival Emory & Henry, which I previously covered here, the university does not play football.

For 2021-22 the university finished 55th in the Director’s Cup standings across all sports among D-III schools.

This is incredible considering the size of the school vs. better endowed schools that finished lower such as Rochester, Franklin & Marshall and Gettysburg. “Pack the Track” is a Lynchburg tradition where the running track is blocked off for intercollegiate sports played at Shellenberger Field on campus.

Lynchburg is a college town, but downtown is not close to campus

It’s fair to call the community a college town when it is also host to Liberty University, which has 15,000 undergrads on campus as well as Randolph College, a much smaller school with 550 students. The City of Lynchburg has a population around 80,000 which is actually larger than the host towns for many universities including Blacksburg, home to Virginia Tech.  However, you can walk into downtown Blacksburg from campus.

I have actually been to Lynchburg when I visited Randolph College several years ago. The downtown has dining places and coffee shops that are affordable to college students as well as microbreweries for those over 21. However, the campus is four miles away, a ten minute drive by car. The downtown is also not within walking distance of the other colleges.

About a quarter of the more than 17,000 University of Lynchburg alumni registered in LinkedIn.com remained in the area. This university also has a nice base of nearly 2,000 alumni in the Washington DC area. To my surprise, there were communities of approximately 1,200 alumni in and around both Richmond and New York City.

The University of Lynchburg is similar to Emory and Henry College.

Both Virginia schools are located in mountain settings and have invested in advancements in educating students interested in business, education and the health professions.  Architecture is in the Georgian style at both schools, though Emory & Henry is much older. They are both Colleges That Change Lives. Both have regional athletic traditions, though Emory and Henry was planning to move into D-II varsity scholarship sports when I reported on the school last year. Emory & Henry is also a smaller school with just over 1,100 undergrads, though it plans to grow the undergraduate and graduate populations.

From a virtual distance, I liked the University of Lynchburg for the B/B+ student who really wants a small college in a picturesque setting as well. The university offers access to academic opportunities that have more competitive admissions at the Virginia public colleges.

I have to respect the school for trying to compete within a very tough market. Virginia has not only great state universities; it also has very good small public options that I have seen only in New York and New Jersey.  A college has to sell itself as “your home,” especially when it has a nice campus setting and maintain affordability. The University of Lynchburg is trying on both scores as it tries to change lives.

Listen to my conversation with Aaron Basko now!