Getting To Know: University of Toledo (OH)

The University of Toledo was the first of three schools that I recently visited in Ohio and Michigan. I was part of a group of invited independent and school counselors. So, I got to learn more about the school than most others I visit. I’ve also gathered a few pictures on Pinterest for you. The University of Toledo has 13,000 undergraduates and just under 4,000 graduate and professional school students. It’s public, but it has a smaller student body than schools such as Boston University or Syracuse that are quite popular with New Jersey’s college-bound population. It also has  notable strengths.

The University of Toledo has not been an ultra-selective institution, nor does it want to be.

Toledo has a community college, but the four-year university has historically been the preferred option in the city. The University of Toledo accepted 97 percent of the students who applied to be in the Class of 2025. Their average GPA was 3.56.  It’s quite possible that many first-year students had already been on campus through Ohio’s College Credit Plus program. College Credit Plus allows pre-college students to take college courses for high school and college credit as early as the seventh grade. The University of Toledo is quite generous with AP, IB or dual enrollment credits and has an Honors College with achievable admissions for a very good student.

The admissions challenge for the University of Toledo is to get past the perception of being a “city school” by attracting more students from outside of Ohio and the Detroit area. This has required major investments not only in the academics, financial aid and marketing, but also student success. Every student has a student success coach who complements the academic and career advising within the student’s chosen school within the university. Freshman retention has taken a higher priority, important at a school where that has risen from 68 percent in 2008 to 79 percent in 2019 just before the COVID-19 pandemic. It should surpass 80 percent, possibly approach 85 percent, as the community moves further from pandemic life and becomes more successful at attracting a more geographically diverse student body.

The best things about the University of Toledo were academics and costs.

There are academic programs that are quite hard to find anyplace else.

This is especially true in the health professions, supported by the recent opening of the pre-health advising center. Admissions to the Bachelors-MD Pathway are achievable for many very good to excellent students, with no cap on out-of-state students, and so are nursing admissions. The same is true for admissions to the Bachelors-DDS program with Case Western, though Case interviews the strongest candidates. The equipment and facilities that support these programs is impressive. That simulated baby in these photos is life-like, too. 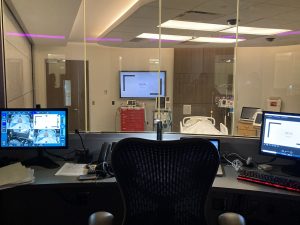 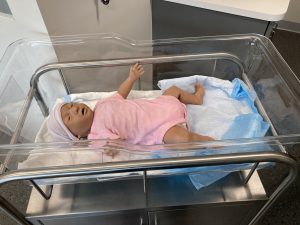 The University of Toledo has the nation’s only program in Cosmetic Science and Formulation Design that combines pharmacology and business courses to help launch careers in the health and beauty products industry. This was a highlight of our group visit, and we also learned how lip balm is made. 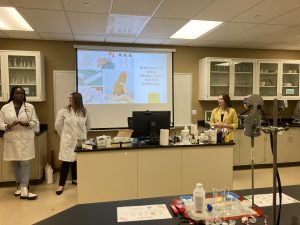 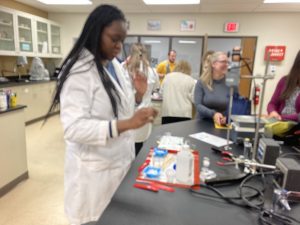 This school also offers an engineering education with a mandatory co-op where students alternate between full-time classes and full-time work over three academic years. Only eight engineering schools offer mandatory co-op. The college of engineering also offers five algebra-based programs in Engineering Technology. Co-op is optional with those majors, but I would recommend it for the work experience. The University of Toledo also has one of the leading centers for astrophysics research in the country, and is a major user of many telescopes on the ground and in outer space. They also have some interesting and impressive facilities of their own: the Ritter Planetarium and the Brooks Observatory.

Few public universities offer as many accelerated paths to masters degrees as well as the law. I also liked the presentation that my group saw on the communications program. Students get more experience in broadcasting working in a major market (Toledo and Detroit) than they might at Michigan State.

Out-of-state students will find good value at the University of Toledo.

Twenty percent of the undergraduate student body comes from states outside Ohio. The university has always attracted students from Michigan, especially from the Detroit area, but wants to broaden its outreach. This past year non-resident direct charges (tuition and fees, room and board) were $33,600. However, applicants with a 3.0 or better received scholarships that ranged from $8,000/year to $14,000/year. The two largest awards made room and board essentially free. Students who graduated last fall who took out loans owed just over $25,000. That’s $2,000 less than they could have borrowed through the Federal Student Loan program.

For next year non-residents who enter with a high school GPA over 3.5 will pay only $200 more in tuition than Ohio residents.  This year Ohio residents were asked to pay less than $11,400 in tuition and fees. While the university has not announced charges for 2022-23, it will still be a great value for a bright non-resident student who likes the academics as well as the setting. It’s quite possible to get a great education with minimal debt here.

I admit that I knew virtually nothing about the University of Toledo or the city before my visit.

The university’s fortunes are somewhat tied with the city’s.

Toledo, Ohio prospered around manufacturing and grew to a population of 380,000 by 1970. However, as jobs left the city, the population has recently dropped below 270,000 residents.  Much of the bad that befell Detroit, only an hour’s drive away, also befell Toledo. Businesses, shopping and jobs moved away, though workers left the city for suburbs while they were still working. Homes were abandoned. However, much of the good that has helped to revive the Motor City has also helped Toledo. Like Detroit, Toledo has a first-class zoo and art museum as well as enthusiastic sports fans, urban pioneers and gardeners. Toledo also has an award-winning network of urban parks called Metro Parks and quite a few interesting places for drinking and dining. There really is a Tony Packo’s, a Hungarian restaurant made famous on M*A*S*H, the Korean War comedic drama that aired from 1972 to 1983.

I love M*A*S*H. It’s one of my favorite TV shows, I knew that the Section 8 seeking cross-dresser turned company clerk, Cpl. Max Klinger, hailed from Toledo. So does Jamie Farr, the actor who played him. There’s a park named for Farr in the city, but it’s eight miles from campus. Max Klinger also wore a Mud Hens jersey. The Mud Hens, the Detroit Tigers top farm team, have a really nice ballpark, Fifth Third Field, located in a district appropriately named Henville. That’s a interesting neighborhood, especially if you love baseball. But it’s between four and five miles from campus.  Toledo is also the long-time home of Jeeps (photo below). However,  it’s better known as the Glass City as home to glass manufacturers Libbey Owens and Owens Corning. The health care sector is probably the largest industry now, led by ProMedica, which is headquartered downtown. 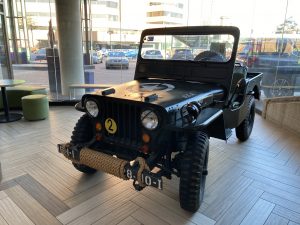 The downside is that the city’s cultural assets are not next to campus.

If the campus was located within a short walk to Henville through a beautiful Metro Park, I believe that more students would be sold on the University of Toledo. However, the campus is not in the center of the city; it is more on the outskirts. The most attractive buildings–see three below–are made from Indiana Limestone, much like the campus of Indiana University-Bloomington. But the difference between this campus and a Big Ten school such as Indiana, Michigan State or Ohio State was trees. Those campuses have a lot of more of them and they’re more mature. The school currently houses about a fifth of the undergraduate student body, including half of a freshman class. But I also found apartments near campus listed on apartments.com that could be less than $400/month. However, I felt that parking was tight on the main campus if your classes happen to be there. Parking is a lesser concern on the health care and engineering campuses. 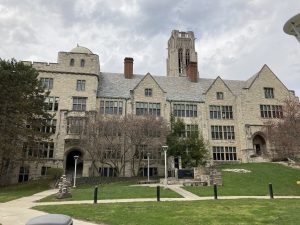 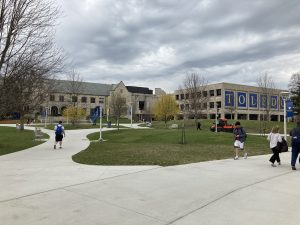 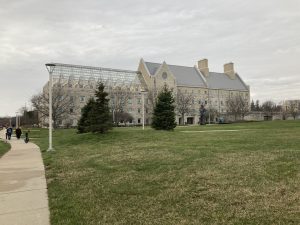 There is pride in athletics here, especially football.

The University of Toledo Rockets compete in the Mid-America Conference (MAC) in 14 NCAA D-1 varsity scholarship sports..The city is the largest sports market in the conference in terms of population, exceeding Buffalo by 20,000 people.Football is the highest-profile sport, attracting an average of over 20,000 fans per home game. Two 2021 Rockets, Tycen Anderson and Samuel Womack, were selected in the NFL Draft this past weekend. Two current players, Dionte Johnson of the Pittsburgh Steelers and Kareem Hunt of the Kansas City Chiefs, have prominent roles on their teams.

Toledo was the first head coaching stop for Nick Saban before he moved on to become defensive coordinator for the Cleveland Browns on his way to head coaching successes at Michigan State, LSU and Alabama. Matt Campbell won 35 games over four seasons before moving on to his current job at Iowa State. The Rockets have been in five bowl games since Campbell left, but won only one. Bowling Green is the major football rival; the campuses are only 20 miles apart. The Glass Bowl and the Rocket, a deactivated Nike missile were stops during my visit. 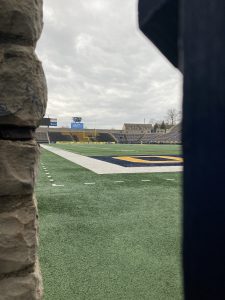 The alumni base is still quite regional.

Among the more than 121.000 University of Toledo alumni registered in LinkedIn.com, nearly 39,000 are in the Toledo metro area. Over 10,000 live and work in and around Cleveland. Detroit and Columbus are also well represented. There are also alumni clubs in 20 US. metro areas outside of Ohio. However, it really helps to be familiar with either Ohio or Detroit as well as the employers in both. The University of Toledo can also be a great place for someone who has entrepreneurial instincts. The university operates a small business incubator and start-up costs will be lower than they would be in many other cities, including Detroit.

The University of Toledo has many opportunities that you will also find at more expensive and more selective public universities, especially in the health professions and Cosmetic Science. The university does not share the city with other four-year colleges, so the regional job market is more open for students who want to build a good resume.  Toledo is actually larger than 11 of the 14 cities in the Big Ten when I consider Northwestern being so close to Chicago, and it has a notable football program for those who love the sport. The University of Toledo campus, while having attractive buildings, is not as close to the city’s amenities as some might like. However, the student body of the university represents enough of the city’s population that collaborations in city planning could help to bring them closer. This and the growing popularity of the academic initiatives should help the University of Toledo attract a stronger student body.