Getting to Know: Wentworth Institute of Technology (MA)

I visited Wentworth Institute of Technology right after I spent a full morning at Northeastern. This was a more personalized experience. I was a tour group of one and learned a lot about freshman and transfer admissions. I collected a few photos on Pinterest to help you become more familiar with this school. While Wentworth was founded in 1911 as a technical institute, it has granted bachelors degrees for only 52 years.

In addition to my visit, I did an interview with Emily Casey, Sr. Assistant Director of Admissions, and two sophomores, Carla Santana and Sarah Denis. I hope that you will listen to this interview and learn more about Wentworth.

The Wentworth Institute of Technology campus is right next to Northeastern’s. It’s much smaller and the academics are more tech/design focused, but in some ways it was the more interesting school. The institute is organized around five schools: Architecture & Design, Computing & Data Sciences, Engineering, Management and Science & Humanities that offer 23 undergraduate majors. Some of these majors are tough to find at other schools. There’s an interesting Computer Science & Society major for students who want to apply computer science to solving real-world policy and social problems. Construction Management is also a standout major.

Are there comparable schools?

Wentworth Institute of Technology might be located right next to Northeastern, and it might offer some majors that overlap, but it is really not a direct competitor versus the larger, more selective school.

Roger Williams University, located about an hour from Providence,  overlaps with Wentworth in virtually every major. However, it has more “fall back” programs for those who want to change majors and the campus is not at the center of a major city.  The University of Massachusetts-Lowell was one of the most considered schools as were other flagship New England state schools in Maine, New Hampshire and Rhode Island.

While Wentworth has nearly 4,000 undergrads, it has only 200 graduate students. The graduate degree is necessary for architecture, because it leads to licensure in the profession. However, a Wentworth student in other majors is more likely to go on to full-time employment after graduation.

Another benefit is smaller classes, especially in the introductory courses in mathematics, design and the sciences. They are even better when using work spaces (below) for project-based classes. Only eight percent of all Wentworth courses taught during the 2020-21 academic year had more than 30 students. You will not be taught by teaching assistants as you might at a much larger school that relies on armies of graduate students. The professor that you get to know well might later become your best reference for a co-op or a full-time job. 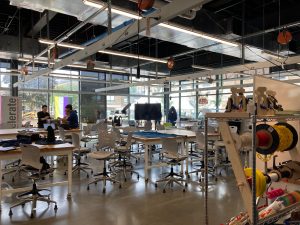 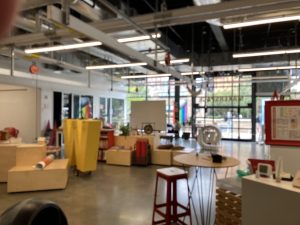 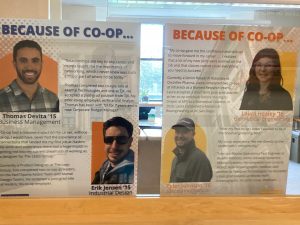 However, there are a few differences.

First, co-op is required to graduate in every major. Northeastern students can opt out and graduate in four years as they would from any other college. Second, all Wentworth students do co-op during the second semester of their junior year and the first semester of their senior year. They take no classes during these semesters, but must take some during the summer in between. There are some nice things to this approach, outside of the salary and work experience: Those who feel ready to tackle a co-op earlier in their education have the option to do so during the summer after their sophomore year, as Carla and Sarah will do.

Wentworth students graduate in four years versus five at Northeastern. Thirty percent of the class of 2021 were offered post-graduate full-time employment by their co-op employer(s)

Wentworth is one of the Colleges of the Fenway.

Collectively, these schools have nearly 13,000 undergrads, Wentworth being the largest with around 4,000. These schools occupy a footprint about the same size as Northeastern’s, but it feels less crowded than the neighboring school. This, and the location, are the most attractive features of this campus community. You can easily get around Boston using mass transit.

Wentworth students may take classes on the other campuses, attend events and mingle in the different dining halls and student centers among the Colleges of the Fenway. There’s even a Sustainability minor that might appeal to Wentworth students in several of the design and engineering programs as well as Construction Management majors. And, like Northeastern, just over half of Wentworth’s students live off campus. However, you are more likely to meet someone from Boston in your classes.

Wentworth Institute of Technology tries to be a ‘Boston institution’.

Approximately 70 percent of Wentworth students hail from Massachusetts, and about a fifth of a freshman class will commute. Unlike it’s neighbor, Northeastern, Wentworth tries to partner with Boston area high schools and runs summer programs to encourage their students to pursue careers in design or engineering.  It also tries to be more supportive when it comes to financial aid. Wentworth has a strong alumni base in the Hub City to approach for co-op positions and full-time jobs. Nearly 23,000 of the more than 33,000 alumni registered in LInkedIn.com are based in the Boston metro area.

Wentworth Institute of Technology attracts a promising B/B+ student who is curious about business, design or technology.

The average GPA for the class that entered last year was a 3.4. But a fifth of the freshmen who entered in 2020 had GPAs below 3.0. Wentworth appears to admit more on potential than actual numbers, since 90 percent of applicants for the Class of 2025 were accepted. Potential might be defined by grades, but it can also be supported by engagement in extracurricular activities such as robotics or drawing contests.  Test-optional is truly test optional at Wentworth. Only a fifth of the students who entered last year submitted SAT scores.

Calculus is not required to declare in computer science or engineering.

However, it really helps to be comfortable with math to succeed in these majors. Like it neighbor, Northeastern, Wentworth’s engineering programs are accredited by the Accreditation Board for Engineering and Technology (ABET). So, the academic expectations in the curriculum will be the same. Prospective design majors do not need to submit a portfolio to be considered for admission, but they should have some skills at drawing in three dimensions and/or computer aided design software.

The risk of admitting on potential is that you could lose students after the first or second year.

Twenty-two percent of the students who entered in 2020 did not return in 2021. That’s not bad considering the pandemic, the academic demands of these programs and few majors to “fall back” into when a STEM major proved too difficult. These students do not have liberal arts options as they might have at a larger university. A prospective architect or civil engineer could switch into Construction Management, as one example. Students who believe they are interested in one engineering or computing speciality at the state can easily switch into another.

Considering these points, the graduation rates are good. Fifty-seven percent of the students who entered in 2015 finished in four years. Seventy percent finished in five. My hunch from my visit was that most students finished in their intended major, or switched to a similar one so that they could graduate.

Wentworth Institute of Technology could be a life changing experience for promising students who have the curiosity and enthusiasm to pursue their desired major. However, they must be willing to ask for help early in their education and be patient as they learn new material and prepare to go on co-op during their junior year.

Listen to my conversation with Emily, Carla and Sarah to learn more about Wentworth Institute of Technology!

Listen to my latest interview on ‘Tests and the Rest’ with Amy Seeley and Mike Bergin!