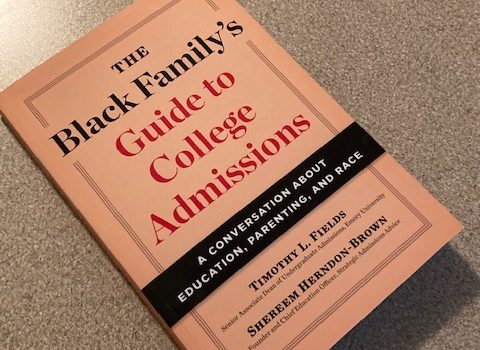 Categories
Tags
The Black Family’s Guide to College Admissions is one of the newest, and more necessary, college advice guides around. It was one of the best college guides that I have read, because it presented new, unfamiliar viewpoints, at least for me. This is going to be a lengthy review. I had to do some homework after I read the book.

It is intended to help them to make choices between Historically Black Colleges and Universities (HBCUs) and Predominantly White institutions (PWIs).
Fields and Herndon-Brown, both Black, also help Black parents to choose the right high school that offers the best preparation for college-level work, and hopefully the best climate for equity, inclusion and opportunity. Historical wrongs from racism, many still not made right, as well as the existence of over 100 HBCUs set Black interests part.  The ‘Buzz Killer’ page at HBCU Buzz is a good place to learn more. That site also has good news about HBCUs that interested families should know.

The Black Family’s Guide to College Admissions  defines success in the admissions process just as I do: that students and their families should have choices.

Today more college-going Black students are drown towards PWIs. But more recently, the co-authors write, there is more interest in HBCUs as supportive student communities. HBCUs have been historically underfunded. But Black students who attend HBCUs have mentioned a higher level of satisfaction with their education vs. those who attend PWIs.

They also added that affluent Black applicants who bring strengths in all three are not advantaged in selective admissions. Diversity in admissions considers not only race, geographic location and sexual orientation; it also considers socioeconomic status. Promising first-generation applicants who have achieved despite more limited encouragement and resources are highly sought in selective admissions, especially those with special talents in academics, the arts or athletics.

This is especially relevant when both are in the same city. For example, I have reviewed Agnes Scott College, a women’s college in the Atlanta area that is 40 percent Black, as well as Spelman, which is also a women’s college. Both are very good schools with strengths in STEM, humanities and the social sciences.  The co-authors of The Black Family’s Guide to College Admissions mention Agnes Scott as one of the more supportive PWIs as well. As another example,  Black student who is interested in national politics might want to check out not only Howard University as well as several other schools in and around Washington DC. Fields and Herndon Brown listed several PWIs in and near the nation’s capital that would be worth checking out.

The co-authors consider the liberal arts to be a “luxury.”

They encourage Black students to take courses that would enable them to build a more secure financial future. I agree to some point. But there are business and quantitative skills that students can learn without pursuing a business degree. The co-authors were also concerned about entering college undecided on possible majors. However, there are many colleges that make it fairly easy to get to a major within four semesters. But I need to add that it is becoming more difficult to enter programs in business, computer science, engineering, nursing or pharmacy after the freshman year.

Fields and Herndon-Brown guided me well through the strengths of HBCUs.

I would never challenge the camaraderie, character and identity building assets of HBCUs, knowing friends who are HBCU alumni. However, I wish that they covered how they selected PWIs that would be the most supportive to Black students. They might have preferred that readers make their own lists, guided by the year-to-year plans in the book. However, many of the PWIs mentioned in this book have extremely selective admissions. I would want to know about more that did not. But among the schools that I have personally visited that have more achievable admissions they listed:

I went to another source to find information on Black student success at PWIs.

The Journal of Blacks in Higher Education listed PWIs where Black students equaled, and in many cases out-performed White students as well as many where they did not. There was a little overlap between Fields and Herdon-Brown’s list and the Journal. The overlap included:

The point about Florida State in the Journal article was interesting.

At Florida State, the university established the Center for Academic Retention and Enhancement (CARE) program in an effort to boost minority student retention and graduation rates. Under this program, students in public schools near the Florida State campus are recruited as early as the sixth grade. Officials from CARE meet with students and parents and build a relationship. After-school and summer programs are offered to help students prepare for college. For students who decide to go to Florida State, a summer bridge program is available to ease the transition. Once enrolled, CARE assists students by offering tutors. Students who are doing poorly are required to attend tutoring sessions in an effort to improve their grades. About two thirds of all CARE students are African Americans.

I realize that graduation rates may not seem like a fair way to evaluate colleges.

Many colleges cater to markets where students must juggle classes, commuting and part-time or full-time work. I worked with one such HBCU, Medgar Evers College (NY) when I was in the software business. Other schools, HBCUs included, admit on potential instead of numbers such as grades and test scores. Those students may need more support and time to find a career direction and earn a degree.

However, graduation rates are an indication of student satisfaction and success.

This is especially true at schools that are quite residential or very large, like Florida State. With the exception of Spelman, the retention and graduation rates at HBCUs are lower than they are vs. PWIs of comparable size and academic offerings. For example, Howard University (DC), a Black Ivy like Spelman and it’s neighbor, Morehouse College, graduated 53 percent of its freshmen who entered in 2015 on time. Howard is about the same size as Hofstra University (NY), a less selective PWI. Yet 60 percent of their 2015 freshman class finished on time. I strongly recommend that all families at least ask about the academic advising and support services that are offered at every school on their list. Even the very best students entering college seek tutoring, among other services, to help them to go better college-level work.

Essence magazine made a list, too, in partnership with Money magazine.

This list included 50 “top” HBCUs and PWIs based on affordability and return on investment. However, they set a low percentage, (5%) for Black students enrolled at the PWIs on their list. A reader might gain respect for the 17 HBCUs on this list. However, if the writers had set a higher cut-off for Black student enrollment at the PWIs they might have gotten a different “top four” than Harvard, Princeton, Duke and Cornell. There was some overlap between this list and The Black Family’s Guide to College Admissions, including:

The magazine article also listed two others: Stony Brook University (NY) and Rutgers-Newark that were not in the book.

The best way to get to know a school is to visit and interact with as many students as you can.

The virtual impressions and visits created by colleges are simply not enough. Student-produced vlogs on YouTube might be more revealing, and their authors respond directly to positive and negative comments. Current students and the most recent graduates will know more about the social life of their college than anyone else.

Reading The Black Family’s Guide to College Admissions helped me to better appreciate the benefits of an HBCU and reminded me that a PWI could take more positive steps to attract, retain and graduate more Black students. This is especially true for dedicated organizations, events, social  and exhibition/performance spaces as well as more focused career development. Black students seeking internships, co-ops and full-times are likely to face issues that their White classmates might not. However, I hope that they and their families know more about this before they commit to a school. An HBCU or PWI should make a Black student feel educated, happy and safe.