Getting To Know Drew University (NJ)–Again

Since I live in the Garden State, and wanted to help those who might stay home, I look advantage of an opportunity to attend a Discovery Day program at Drew University. This school also has very a nice campus set in a state forest. Check it out on my Drew University Pinterest page.  It’s easy to walk this campus from end to end in less than 15 minutes. Another plus: the Kirby Theatre (pictured above) is one of the best theatre spaces that I have ever seen at a small college. I got to see a musical version of Stud Turkel’s book, Working, during my visit (photo below). 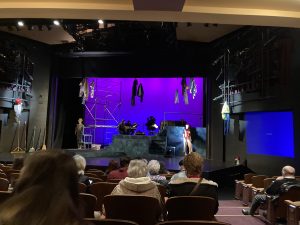 Getting into Drew is not all about numbers

Prospective students are expected to have some rigor on their transcripts, but low test scores, or no scores at all, will not knock you out of contention. Drew is a great school for someone who has a 3.5+ GPA and has demonstrated curiosity about a career, or at least a particular major. Around 70 percent of those who apply are accepted. One surprise from Drew data: Drew wait-listed 203 applicants for the Class of 2024–and 194 wanted to stay on the list!

Drew University is best suited to a student who truly wants a liberal arts education.

Nearly all of Drew’s majors and minors would be considered liberal arts subjects, with the possible exceptions of the Business major as well as the minors in Arts Administration, Museology, Photography and Public Health. Drew’s general education requirements are typical of most liberal arts colleges. But the school makes it relatively easy for students to double major—about a quarter of the students do—or complete more than a single minor. Virtually no class at Drew will have more than 40 students, even the introductory courses in subjects such as Economics or Psychology. I ran into more Theatre students than I usually do at most colleges. However, about a fifth of Drew students major in math or the sciences. The very best of them do research with not only with faculty, but also with retired scientists who worked in the pharmaceutical industry.

Like other liberal arts colleges of similar size, Drew University is very residential.

Ninety-four percent of Drew students live on campus. First-year students are grouped together in living-learning communities in three halls (Tolley, Brown and Welch) around their choice of freshman seminar, but have numerous options after that. However, Drew offers fewer independent (apartment or townhouse) living opportunities than comparable schools. Drew maintains the same pricing for double rooms, regardless of the housing, though there is an up-charge for a single room. Upper-class students are more likely to live in traditional or suite-style housing than a townhouse, and they, like the freshmen, are required to purchase a meal plan.

Students are more likely to bond around shared interests as well as travel into New York City.

Downtown Madison, only a five-minute walk from campus on foot or by shuttle bus, is beautifully maintained, much like a downtown on a Hollywood movie set. However, it is more of a family oriented place than a college town. It’s a great place to grab lunch, a nice dinner or dessert off campus. But there are no college themed bars, clubs or movie theaters. But Drew’s main advantage is its proximity to New York.

Only one National Liberal Arts College, Sarah Lawrence, is as accessible to New York City from a suburb.

Drew offers seven  New York Semester programs to encourage students to check out career options in the city. Two, Theatre and Cultural Management, are offered every other year. The other five are offered every year. Drew has over 8,300 alumni registered in LinkedIn.com who come from the New York area. That’s more than Skidmore College (7,600) or Connecticut College (4,900) which are larger schools.

Drew could be a smaller version of Skidmore College, located near Albany, New York. Skidmore has a forested campus, is located near a nice downtown, and has advanced strengths in arts, social sciences and sciences. Both Drew and Skidmore offer scholarships for the arts and STEM. However, Skidmore has 900 more undergraduates. Connecticut College is another school that, like Skidmore, could be considered aspirational. Wheaton College (MA) has about the same number of students as Drew, similar academic strengths and equally generous aid. That school is about an hour from either Boston or Providence.

Ursinus College (PA) and Lake Forest College (IL) might be options if you want a school with a small (less than 1,600 undergrad) student body that also has programs in a larger city, and well-developed science programs, but prefer more spirit and sports. Like Drew, those schools attract the majority of their students from in-state, though they have become more appealing to non-residents. To my surprise, 60 percent of Drew’s recent freshman classes have come from New Jersey.

Drew is becoming price-competitive with big state schools out of state!

It’s really good news when a school is able to grow a freshman class and add services to help them to stay and finish on time. It also helps when the school reduces tuition. Drew reduced these charges from just over $49,000 in 2017-18 to $42,700 for the current academic year. Room and board remains on the high side, at nearly $16,000.

However, the university also awards merit scholarships between $10,000 and $25,000. The average need-based scholarship was nearly $30,000 for the freshmen who arrived in Fall 2020. The average borrower who graduated in 2020 owned $26,000, low for a private college of any size. The maximum that an undergraduate may borrow over four years through the Federal Student Loan Program is $27,000.

While liberal arts colleges have experienced downturns in enrollment, Drew’s undergraduate population has grown. In 2014, while I was completing my credential in college admissions counseling, Drew had fewer than 1,400 undergrads.  Six years later it had 1,600. The better students are also doing better in the classroom. Freshmen retention went from 79 percent for the class that entered in 2010 to 88 percent for the freshmen who arrived in 2020. Just under two-thirds of the freshmen who entered in 2013 and 2014 graduated within four years. That’s very good, but other liberal arts colleges, including Ursinus and Wheaton, have done better. This might be a reason why Drew is marketing Early Decision more aggressively.

Drew is using an Early Read and incentives to encourage students to apply Early Decision.

If you visit Drew and fall in love with the campus, community and academics, you have an opportunity to get a preliminary review on the chances for admissions and financial aid. The thought is that you might want to consider applying Early Decision. There are some benefits, including priority registration, early parking privileges, and a grant toward the purchase of a Drew-approved laptop. Drew got a fifth of the Class of 2024 through Early Decision. But the incentives were not in place for those students.

Drew is an “in-between” school within a very tough market that wants to be the first choice for its best prospects. It attracts very good students who might not necessarily gain admission to an ultra-selective liberal arts school. I liked Drew for those who prefer to be themselves and do not want to go to a college that has dominant groups of students.

Want to know more about me-and why Drew University and other schools are good colleges?