Getting to Know Wheaton College (MA)

Wheaton College (MA) is an excellent liberal arts college that gets lost among the more famous names in New England. I have gathered a few photos of Wheaton College on Pinterest. There’s also a nice 2.5 minute commercial for the college that was made by students in the Film and Media Studies Department. You can also take a short campus tour online. This campus has a mix of Federal style (19th century), Pressed Concrete (1960s-1970s) and sleek 21st century architecture. Check out some photos above and below. 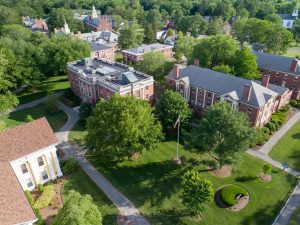 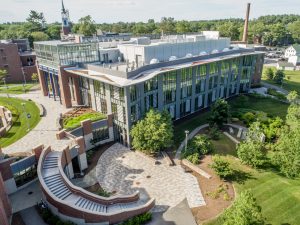 It’s tough to knock a college that uses their pond as a focal point around campus traditions. Convocation and graduation marked by candle lightings are held around the pond (photo at top of page), and so is a homemade boat race that has taken place every spring pre-pandemic. Ask about campus events and traditions if you visit Wheaton. The social life is going to be more campus based than it is at other colleges that are within major cities or college towns that are also tourist destinations.

Norton, home to Wheaton College, is actually closer to Providence than it is to Boston. But that should be considered a good thing.

Brown and Providence College students will attest that there is plenty to do in Providence. The college runs bus trips to both cities. There are also bus connections to mass transit when you want to plan your own excursions, though it is helpful to have access to a car. Wheaton also offers a 15-week semester in Boston where students intern with a leading social change organization. The college’s alumn network is strong in Providence and Boston. If you know or like New England, and want a liberal arts education, Wheaton College might be your school.

Wanda Suriel, Director of Admission at Wheaton College and I chatted, and I invite you to listen now.

Wheaton College was founded as a seminary for women in 1834. It became a liberal arts college in 1912 and went coed in 1988. This is a small school with fewer than 1,800 undergrads. There’s few required courses: a Connected First-Year Experience, Sophomore Experience and at least one major. The college assigns two advisors. One is an academic advisor; the other is a student success advisor. Essentially the college helps you to find a major and a direction at the start. The college also offers a $3,000 stipend to help students to accept unpaid summer internships.

An empowered  curriculum gives a Wheaton College student great power over their academics. But with great power comes great responsibility.

You want to be in a position to choose between several possible majors, and maybe minors, by the end of your sophomore year. The college mentions that it offers 47 majors and 59 minors. A quarter of the students choose to double major. Some majors that you are less likely to see at other schools include Ancient Studies, Animal Behavior, Development Studies, Digital Humanities and Public Health. Most classes will be small. Sixty percent of Wheaton College courses have fewer than 20 students. Only thirteen classes out of more than 300 had more than 40.

It helps that Wheaton tries to meet financial need.

The college met, on average, 96 percent of need for the freshmen who entered in 2018. The average need based award covered 56 percent of the college’s estimated total cost of attendance. However, student loans were part of filling need. Borrowers who graduated in 2019 owed an average of just over $34,000. More recently, the college mentioned that 39 percent of the next freshman class received merit awards. These went as high as $40,000/year.  My sense is that a family that might be full pay at Home State U or Neighboring State U might want to take a shot at Wheaton if they would prefer a small private college. It could work out financially.

Wheaton’s approach to the liberal arts is similar to several of the Colleges That Change Lives.

This school can give a B+ student an educational experience that an A+ student expects to receive at an ultra-selective small private college. But Wheaton is not ultra-selective. Test optional for several years, Wheaton accepts over 70 percent of the students who apply to join a freshman class. Demonstrated interest is important. So, it really helps to learn as much about Wheaton before you apply. Want to check out another school during your time at Wheaton? The College participates in a 12 College Exchange with Vassar and ten New England Colleges that will be names you may know. Or you can opt for a Washington Semester at American University.

While admissions are achievable, Wheaton has attracted high achieving students.

Wheaton College graduated 71 percent of the freshmen who entered in 2013 snd 74 percent of the freshmen who began the year before. Those are the grad rates that you should expect to find at a very good liberal arts college. Wheaton does better at graduating a class than Drew University (NJ) and Goucher College (MD), similar schools that are also close to major cities.

It’s rare to find a liberal arts college like Wheaton with a flexible curriculum and great access to major colleges and cities. I hope this school gets on more lists.

Learn more about Wheaton College in my conversation with Wanda Suriel, Director of Admission!