Getting to Know: College for Creative Studies (MI)

The College for Creative Studies (CCS) might have been one of my target schools if I was going to college in 2022. I wanted to design cars until I was 14. Unfortunately, there were fewer car manufacturers than there are now and fewer design studios. In 1974 a designer would be lucky to land a job with one of the Big Three car makers: Chrysler, Ford or GM or the Little Fourth: American Motors. Today Cadillac, a division of GM, sells six cars. The other divisions within the rest of the Big Three sell nine–total–along with a whole bunch of trucks and SUVs. The Japanese and Korean car makers offer far more choices and they have studios in the US. I would probably be studying these languages as well as transportation design using really cool tech. There are more CCS alumni working in transportation design in the auto industry than any other school in the world. GM alone employs 175.

I had the opportunity to attend a counselor’s briefing hosted by the College for Creative Studies, so I thought I’d share what I like about this school as well as some things that others must decide for themselves.

The College for Creative Studies is very well connected to a large business community within and outside Detroit. This is important for all majors, especially interior design, product design and transportation design, and sponsored projects sometimes include scholarships. More important, students get to make connections and have their work judged by experts and people with authority to hire. These projects, along with the academics, helped 90 percent of 2019 graduates to find work within six months after graduation. Design events focus around reviews of student work. There are between five and 15 sponsored projects per semester.

I worked in New York City, which has several art and design schools. So, I can appreciate the high level of competition for free lance opportunities, internships and full-time jobs. However, the College for Creative Studies shares the downtown Detroit market with only one other school: Wayne State University. That school offers a BFA in Art as well as a BFA in Design. However, Wayne State does not require a portfolio, nor does it use one to make admissions decisions.  The College for Creative Studies has portfolio requirements. I did not believe that they were as heavy as they are at Rhode Island School of Design and the admissions office seems more encouraging. This school accepts slightly less than half of all applicants, but does not require the ACT or SAT. The transcript and portfolio matter more. If you’re in love with CCS, get an early opinion on your work from the admissions team.

This is one of the few schools in the world that offers Transportation Design as well as Concept Design and Entertainment Arts. Game Design is also offered from the artistic (versus the computing) perspective. I recommend taking the virtual tour before you visit, so that you can see the tools that students use in these majors. This is a small school (around 1,500 undergraduates), so students will get to use the tools that they see online and during their campus visits. This and the sponsored projects are the best part of the CCS experience.

Decide For Yourself: The Two Campuses

CCS has two campuses in the city a mile apart, accessible by a shuttle that runs 24/7. The larger Ford Campus (below) is dominated by the ‘Brutalist’ style of architecture that dominated new construction on college campuses during the 1960s and 1970s. However, the apartment-style residence halls on this campus looked nice on the virtual tour. 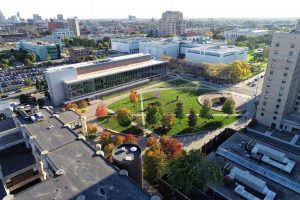 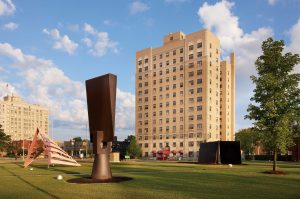 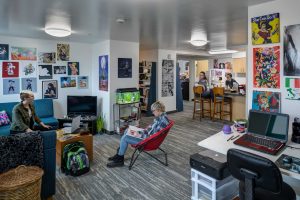 The Taubman Campus, pictured at the top, was GM’s former corporate headquarters. Opened in 1928 and expanded in 1936, this building not only housed GMs offices; it was also the original home for the car maker’s styling studios. Clay models of future cars were actually painted in this building. Today the College for Creative Studies shares this building with an arts middle school and high school as well as Shinola Detroit, a watchmaker and fashion icon. Classes in this building follow an open plan and the housing is loft-style residence halls and apartments–right near your classes and workspaces!  Check out the photos below. 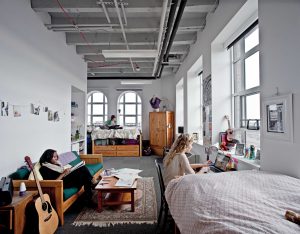 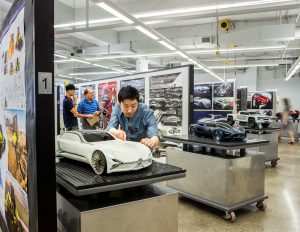 The two campus settings reminded me of the Fashion Institute of Technology in New York City, although that school has much more pedestrian traffic around it, because of its proximity to Madison Square Garden, the Chelsea neighborhood and Penn Station-New York. I really recommend two tours, virtual and live, especially if you don’t know Detroit. The city has monorail and trolley lines to help you get around, but the pedestrian traffic patterns are nothing like you would see in cities such as Boston, New York or Philadelphia. The last time I was in Detroit was in 2003, five years before CCS acquired the Taubman Campus. Back then I rode the monorail from Renaissance Center to Comerica Park. But most of my views between the two places reminded me of an urban movie set with no people around after the filming ended.

Decide for Yourself: City School With A Small Student Body

From the virtual tour and YouTubes that I watched, I felt that the College for Creative Studies was a very collaborative environment for the right person, even though the job markets in the majors are quite competitive. However, you had to make your friends quickly and be open minded. Art schools attract people from varied ethnicities and orientations, more than many traditional colleges that have fewer than 2,000 students. Diversity abounds at CCS, much like an urban university such as Temple and Rutgers-Newark. But there are far fewer people on campus and you live quite close to your classes. The workload takes up so much time that there’s less time for the extracurricular activities that you find at a more traditional college.

Decide for Yourself: Costs

This experience will come with an estimated total cost of attendance  of $63,400 for the 2022-23 academic year That’s going to be less than Parsons, the New School for Design and Pratt Institute, which have some academic overlap with CCS. There is a competitive scholarship for the Art Practice major worth $50,000/year. Other grants are available for other majors based on a review of academic work as well as the portfolio. Complete your application by December 1 to have the best chance at scholarships. The average award was $22,000/year. Costs and intended major go together. There’s a difference between getting into one of a handful of target schools that offer Transportation Design or Concept Design where you have to pay to get the major versus one of many, public or private, that offer Illustration or Fashion Design.

Freshman retention after the 2018-19 academic year was 84 percent, based on the most recent data that I could find, progressively up from 71 percent for 2014-15.

That’s not bad, considering the limited number of majors at CCS. Then again, this might be a school where students do not change from their intended majors after completing the foundations courses during the freshman year.

CCS is a slam-dunk for the unique majors that benefit from the connections and location. Detroit is an re-emerging city with strong ties to the entertainment and transportation industries that is also building an interesting fashion community. However, this school has a different urban vibe than schools such as Parsons or Pratt. I recommend that you visit twice, before you apply and after you get in.