Webb Institute is the most unique college that I have ever visited. With just over 100 students– total– it’s also very small. There’s only one degree program: an ABET-accredited B.S in Naval Architecture and Marine Engineering.  Several schools also offer this degree as well as programs in Ocean Engineering. But only four other programs in the US are similarly accredited. One is at the University of Michigan, another is at the University of New Orleans. The last two are the US Coast Guard Academy and the US Naval Academy. I could not find many Pinterest photos of Webb Institute, but there is a very good virtual tour on YouTube conducted by my host on my visit, Lauren Carballo, director of admissions.

You can really feel the history of Webb Institute when you walk the grounds.

Located on the North Shore of Long Island the mansion (top photo) that serves as home to Webb Institute was once the summer home of Herbert Pratt, who was Chairman of Standard Oil. The mansion appeared in Gotham, a Fox Batman prequel as well and was Bruce Wayne’s home in Batman and Robin and Batman Forever,  both starring George Clooney. It was also Thomas Wayne’s (Bruce Wayne’s father) home in Joker.  Below you can see the statue of founder William Webb, and the view of Long Island Sound,. Interestingly, Webb faces the buildings and grounds as well as the class, faculty, administrators and guests at graduation. Webb also hosts guest lecturers, including one Long Island native, a Mr. William Joel, who has designed his own boats on paper napkins. However, the audience is not treated to a concert when he comes. 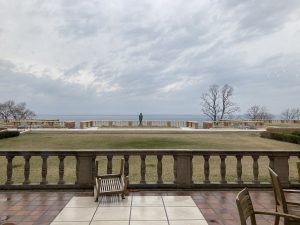 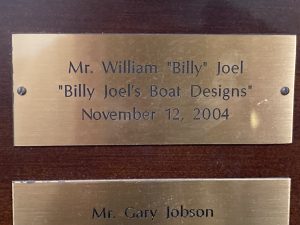 I felt like I was in a smaller version of Hogwarts or the X-Mansion in Marvel’s X-Men movies, only neither fictional school has a pub (photo below) on campus where the 21 year olds must prevent the underaged from drinking. The students I met–and I probably spoke with  over a fifth of the student body–appear to get along well and take responsibility for governing their day to day lives. Webb Institute has a student government, class officers and an honor council. 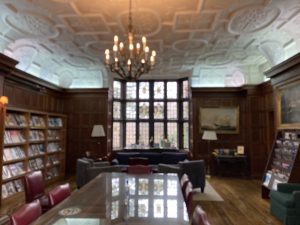 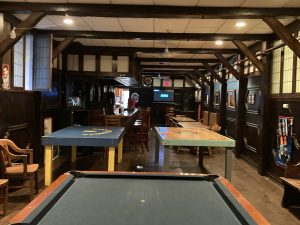 Webb Institute was founded in 1889 by master shipbuilder William Webb.

When you take the tour, you can see some of his ship designs (photo below left) as well as those of distinguished alumni (one below right). I liked the vibe from seeing the various models. It tells me what you can become capable of doing if you work hard and advance in the shipbuilding industry. Interestingly,. I learned that a third of Webb Institute alumni move on to other pursuits such as the law and investment banking. 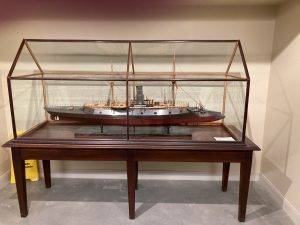 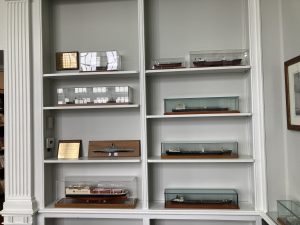 Until his death in 1899,  Webb assumed all the operating expenses of the Academy to make the education free to qualified students. With the help of an active alumni base and a well-managed endowment, the school has remained tuition free ever since. In FY 2020 Webb’s the market value of Webb’s endowment was just under $63 million, according to the National Association of College and University Business Officers. That may sound small, but there many ultra-selective schools with freshman Biology or Psychology classes that are larger than Webb’s entire student body!

Only 18 percent of the applicants for the Class of 2024 got in. The middle 50 percent scored between 33 and 35 on the ACT and between 1430 and 1540 on the SAT. Most important, all 28 members of the class received a full scholarship. Admissions from the Class of 2023 through the Class of 2025 have become increasingly competitive. The number of complete applications rose each year from 144 to 169 to 186.  Between 75 and 80 percent of accepted students decide to come. I have heard of only one non-service academy that does better at yield: Harvard.

Invited candidates have one interview with admissions, one with a faculty member and one with the president. The interviews help determine motivation as well as the potential to be a valued alumnus after graduation. While Webb Institute is a very small school with only 1,100 living alumni the  annual giving rate often exceeds 75 percent,  one of the highest in the nation. Prospective students do not need to have prior experience with boats and being a legacy carries no advantage in the admissions process.

It’s also tough to get to the finish line at Webb Institute.

This degree program is in essence a dual major within an engineering school. It requires 146 credits to graduate along with four paid two-month winter internships. The first internship takes place at a shipyard, the next at sea. The last two might be in ship design, operations or systems, depending on a student’s interest. Because of the two-month internships, Webb Institute ends the spring semester in June. Some students opt for summer internships, but others might do community service or take a break. By comparison, the degree from Michigan requires 128 credits. Of course there are a lot more distractions at Michigan as well as the opportunity to change your major and try internships in different fields

If you can do the work, you will not only graduate from Webb; you might also leave with several job offers. Over three quarters of the students who entered in 2015, the most recent year data is available, graduated on time. The average starting salary is in excess of $72,000. Two graduates, Wombi Rose and John Wise, took their talents beyond ship design to Harvard Business School. They co-founded Love Pop, makers of metal pop-up greeting cards, developing a metal cutting tool that was based on a tool for making model ships. Love Pop later became one of Kevin O’Leary’s most successful investments on Shark Tank.

The alumni network, including the most recent graduates, is also quite active in helping students find internships and jobs. There is a lot of institutional memory in this school, whether it is on the staff or the presidency. The retiring president is a Webb alumnus. The incoming president is an alumnus, too.

Webb Institute is very much a hands-on experience.

One Webb student told me that “Naval architecture is like magic. No one understands it, but it works.”  I have to agree. Ships are built to accommodate different uses whether they deliver oil from a refinery or a deepwater rig, carry cargo or people or are used for a military purpose.

Come to Webb Institute and you will be able to take apart a ship’s engine, like this Cummins diesel, and put it back together.  After I got home from Webb I contacted a friend who is an airline pilot who explained the differences in motors between ships and planes.  He explained that most commercial ships have two or more diesel engines. They turn big generators. These in turn power the ship and the electric motors that drive the ship. That’s why ships are always running. They may also have bow thrusters that run off of the electric motors. 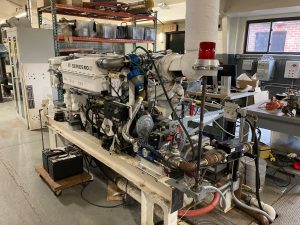 By comparison, wide-body aircraft will have two or more generators per engine plus an Auxiliary Power Unit. Some have a RAT, a Ram Air Turbine, a generator hooked to a propeller. That provides electric power if everything else fails. A 787 has three generators on each engine, and any one of them came power the whole airplane. It has three back up generators that can power critical systems, and a RAT if all else fails. Three permanent magnet generators power the flight instruments. With ships space and weight are not an issue. Airplanes are all about space, weight and redundancy.

The message from this: if you’re curious about one mode of transportation, and this extends to automotive and aerospace engineering, either aim to learn about that mode before you commit to a school, or choose a school where you can change your mind.

Part of the Webb experience is learning to fail.

All first-year students participate in a boat building competition where teams build boats from wood and attempt to race them on Long Island Sound. However, things do not always go well when the boats get into the water. 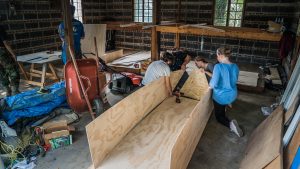 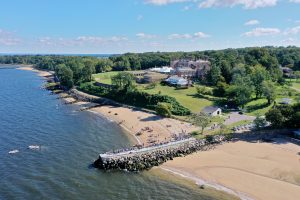 There are sophisticated work stations for each class from freshmen through seniors as well as tools for testing models in water and the wind. But there are also exercises where only simple tools and wood will do. 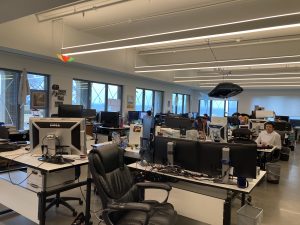 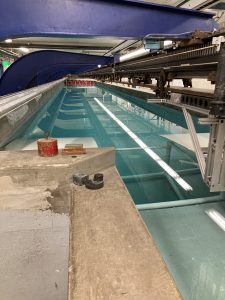 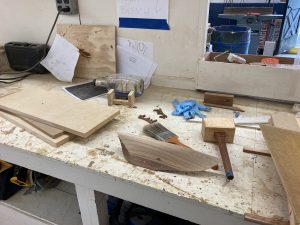 Webb Institute is too unique to compare it to other colleges in a report card. There is only one major, and the industry connections revolve around the instruction received by  generations of “Webbies,” students and alumni. Like Cooper Union in New York City, Webb Institute was founded on the premise of a tuition-free education in science and technology. The major difference is that Webb also offers a unique residence life experience that bonds around the workload. Each person brings their strengths, and does not pretend to know what they don’t know.

There are extracurricular activities at Webb, including varsity sports versus other colleges, and it’s relatively easy to get to Manhattan if you get a ride to the Glen Cove train station. But the work consumes so much of your time–and you cannot do it alone. Webbies live in a Gilded Age bubble where they live, work and dine together. But I met no student who regretted the experience or the rigor they signed on for.

Listen to this interview on Tests & The Rest with Amy Seeley and Mike Bergin!