Davidson College was one of those schools that I had heard of, but knew nearly nothing about until now. Located about 20 minutes from Charlotte, Davidson is a selective liberal arts college much like Amherst or Williams, only larger, and without the snow.  But it offers an astounding selection of majors, minors and interdisciplinary options those schools don’t. I felt that Colorado College was the most comparable school in terms of academic options and student body size.

Davidson’s general education requirements are more structured than Amherst’s, which has an open curriculum. But they leave ample room to double major or carry a major and multiple minors. They also leave ample opportunity to do research with the faculty. These experiences not only provide enrichment; they also help students to be well prepared for advanced degrees and future employment. Davidson is also a member of the national Liberal Arts Career Network. It’s member schools share job and internship opportunities.

I got some virtual impressions of Davidson through Pinterest as well as an interview with Davidson College junior Aislinn Whelan. Aislinn is a great guide to tell you more, so please listen in. A Chemistry major at Davidson with a minor in Applied Physics, Aislinn explained how broad and rewarding  a Davidson education can be.

I obviously did not get to take a tour of Davidson’s campus, except by virtual means. Aislinn not only told me how beautiful the campus is, but also how faculty, students and visiting artists contributed to the ambiance through sculptures, including this one below. 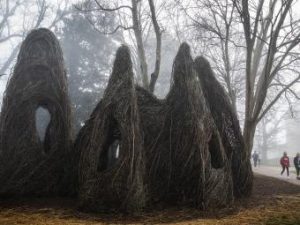 I’m a college basketball fan, especially this time of year. I knew about Davidson through the exploits of Stephan Curry. Twice named Southern Conference Player of the Year, Curry led Davidson into the NCAA’s Elite Eight as a sophomore. Drafted seventh by the Golden State Warriors after his junior year, Curry has become one of the best players in the NBA, though as of this date he has not finished his degree. Davidson was also been the first stop in coaching for Charles ‘Lefty’ Driscell, He coached for 41 years, led four teams, including Maryland, into the NCAA Elite Eight, and retired fourth in wins among NCAA D-1 coaches. Terry Holland, a former player, succeeded him. As a senior in 1964 he led Davidson to the #10 ranking in the country. He would become head coach at the University of Virginia, leading the Cavaliers to two trips to the NCAA Final Four and an NIT title. Davidson is also a D-1 football school. However, it plays in the Pioneer Football League. The Wildcats only southern rivals are Presbyterian College (SC) and Stetson University (FL).

I’m also into history and politics and knew that Davidson is the alma mater of Dean Rusk, former Secretary of State under John F. Kennedy and Lyndon Johnson. A Rhodes Scholar at Davidson, Rusk went on to Oxford and Boult Hall, UC-Berkeley’s law school.. Rusk Eating House, the first women’s eating house on campus, is named for him. Other notable Davidson alumni are journalist Tony Snow and novelist Patricia Cornwell.

With just under 2,000 students, Davidson College is one of the smallest schools to compete in NCAA Division I sports. It is also one of the more selective.

Only a fifth of all students who applied to be in the Class of 2024 were accepted. But the acceptance rate for those who applied Early Decision was 47 percent. They made up 59 percent of the freshman class. Davidson, like most other colleges has shifted to test optional admissions. But excellent grades in a rigorous academic program are expected. The average GPA for entering freshmen was a 3.8. For those who submitted test scores the average SAT was a 1390. The average ACT Composite was a 31.

Don’t be afraid to apply Early Decision if you like Davidson.

The college meets 100 percent of demonstrated need. The average need based scholarship for freshman who arrived in 2019 was nearly $51,000, almost 75 percent of the estimated total cost of attendance. That includes tuition and fees, room and board and incidentals such as books and transportation. The average student loan debt for those who had to borrow was less than $23,000. The maximum amount that a student may borrow over four years from the Federal Student Loan program is $27,000. Davidson is as good a value as many public colleges, including UNC-Chapel Hill.

The aid definitely helps. Davidson retains over 90 percent of a freshman class. Eighty-nine percent of the freshmen who arrived in 2014, the last year I could find data, finished on time. That’s a little better than Duke (88%) or Wake Forest (74%) as well as Amherst (88%) which usually vies with Williams (also 88%) for the top spot in US News’ rankings of liberal arts colleges.

Comparisons with Amherst and Williams are more interesting. They’re smaller schools that compete in non-scholarship sports, not concerned about the NCAA Big Dance this time of year. In the meantime, Davidson has made it into postseason play eight times since Steph Curry left campus, including this season. Wildcats basketball is for real. I have to root for a small school to beat the giant unless they’re playing Rutgers or Illinois.

Listen to Aislinn Whelan and learn more about Davidson College!