Getting to Know Butler University (IN)

From listening to a few YouTubes and taking a virtual tour, Butler University felt like a shrunken version of Indiana University-Bloomington. The limestone buildings,  residence halls, gardens, green spaces, college town shopping near campus and Greek Row reminded me of that school.  Butler also reminded me of Drake University, which I previously wrote up for you in terms of its academic opportunities and location in a large city that is also a state capital. However, Butler is a larger independent school (around 4,500 undergrads) and Indianapolis is a much larger city than Des Moines.Looking for an East Coast frame of reference? The closest might be Fairfield University in Connecticut, which has about the same number of students and similar academic options.

I gathered a few pictures of Butler University on Pinterest. I also had the opportunity to chat with Lori Greene, Vice President of Enrollment Management and invite you to listen in

Butler University has topped the rankings in the US News for Regional Universities-Midwest for three consecutive years. From 2010-11 to 2016-17 the school ranked second. Either Harvard or Princeton or Amherst or Williams would be happy to post those numbers over the same time period. Butler has also ranked as the Most Innovative School for the sixth consecutive year, and third for Undergraduate Teaching. While I don’t recommend that people choose a college based on rankings in a magazine, those who choose Butler might feel good about them.

Butler University is a smaller school with several majors that you’ll usually find at larger schools.

Academically, Butler’s offerings are similar to Drake. Like Drake, Butler has schools of arts and sciences, business, communications, education and the health professions. But unlike Drake, Butler also  has a school of visual and performing arts. Don’t know what you want to study? Butler offers Exploratory Studies options among the schools. Butler’s Core Curriculum is much like a state school, with the addition of a two-semester Freshman Seminar and a Writing Across the Disciplines requirement that I usually see at smaller liberal arts colleges.

I was quite impressed by the selection of degree options at Butler. It offers pathways not only to a PharmD in the health professions, but also towards becoming a Physician’s Assistant or scientist. The Lacy School of Business has one of the newest and nicest buildings to host undergraduate and graduate business programs. For those who are considering Butler vs. a larger school such as Indiana, Lacy offers a more personal, and less intimidating setting than you might find at Kelley. Aspiring physicists and others who are interested in astronomy might also want to check out Butler’s observatory, pictured below. 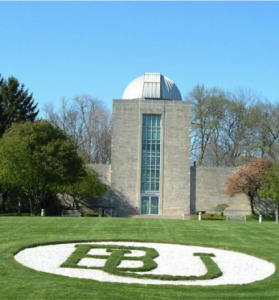 Butler’s approach to academics appears to be working well.

Although hurt recently by the pandemic, Butler has averaged 89 percent freshman retention since 2011. While Butler has students who enter as freshmen with the intention of earning an advanced degree, the most recent four-year graduation rate was 78 percent. The school helps by trying to make the experience more affordable. Over a third of the freshmen who entered Butler last fall received merit scholarships that averaged $22,000, more than a third of the estimated cost of attendance. Butler is not going to undercut Home State U. But it’s going to be an attractive option vs. the non-resident charges at Illinois, Indiana, Michigan or Michigan State.

The university’s location, five miles from downtown Indianapolis, adds to the educational experience.

Butler shares the city with Indiana-Purdue University, which has more than 21,000 undergraduates. There’s competition for internships, but it’s not like going to college in Boston, Chicago, New York or even Columbus or Minneapolis. Bus routes and bike paths are the main ways to get downtown and the university has a partnership with Uber to help.  Indianapolis is known as the Crossroads of America. If you’re from the East Coast it’s close to the point where your clock goes an hour backwards. It’s also a major sports center as a legitimate capital of basketball in America and home to the Indianapolis Motor Speedway, the NFL’s Colts, the NFL Scouting Combine and the NBA Pacers. Butler is one of the few schools that offers a major in Sports Media as well as Creative Media and Entertainment, taking advantage of the school’s location.

Butler is not an exceptionally selective school. But it attracts very good to excellent students.

Butler accepted seventy-six percent of the students who applied to be in the current freshman class. Among those who applied Early Action, the acceptance rate was 86 percent. Admissions are test optional, as they are at most schools now. But if you like Butler, make sure that you take at least a virtual visit before and after you apply. This school takes demonstrated interest seriously. That might be a reason why most of the class–88 percent–was accepted through Early Action. The average GPA among entering freshmen was a 3.9, average SAT was 1240 and the average ACT Composite was a 27. This is about the same profile as students who consider Indiana, Michigan State or the University of Iowa.

It attracts a third of the undergraduate student body. Five of the six fraternities have houses as do seven of the eight sororities, and these houses look large from the outside. While two-thirds of the students are not members of Greek social organizations, and the school is in a major city with a lot to do, the Greek system is an important housing option. Butler requires all students to live on campus for three years. Seventy percent live in university-owned residence halls or apartments.  There’s also good news: Bon Appetit took over the dining services. Their meal options are the best of the outsources that colleges use today.

Butler University got on my radar because of its importance to college basketball.

Hinkle Fieldhouse, built in 1928, has been called the ‘Cathedral of Indiana Basketball.’ From 1928 to 1971 it hosted the Indiana High School Basketball Tournament, including the final scenes of the fictitious final game in Hoosiers, one of the best sports movies ever. The field house seats 9,100 and is often considered one the classic venues to watch college basketball. From the mascot’s view, this place rocks before, during and after the game. Blue IV might be one of the hardest working mascots in college basketball. The game bone, which Blue rarely gets to chew, is saved after every home game and auctioned for charity. Best of all, tickets are free to students, and they get really good seats.

The Butler Bulldogs missed the NCAA Tournament this season. But they got to the final game in the NCAA Men’s Basketball Championships in 2010 and 2011, losing to Duke and UConn. After a poor first season in the Big East, the Bulldogs made it back into tournament play from 2014 through 2019. Brad Stevens, who coached the Bulldogs into the National Championship games, has become a successful head coach with the NBA’s Boston Celtics. Former coaches Thad Matta and Chris Holtmann have succeeded at Ohio State.

But I can’t call Butler a ‘football school’.

Butler is D-1 in football. But football attendance averages less than one-third of what you see at a Bulldog basketball game (around 3,000/game). The university plays in the Pioneer Football League, same as Davidson College and Drake University, which I have previously covered on Educated Quest. However, aside from Drake and Valparaiso, it’s hard to imagine natural rivalries in a league so spread out. The Big East has at least four Midwest rivals for basketball and other sports: Creighton, DePaul, Marquette and Xavier.

Through a virtual lens, I can see that “good things happen when you unleash a Bulldog.”

If you are interested in the spirit, sports and academics found in a larger school, but prefer a far less crowded and less intimidating setting, Butler University might be your school. There are not many schools like this: independent, mid-sized and academically comprehensive, in our country. I wish there were more.

Listen to my conversation with Lori Greene and learn more about Butler University!